Fishing, rock-n-roll, and green beer. That’s what St. Patrick’s Day is all about in our books! And, as “luck” would have it, the PELAGIC Rockstar Tournament Series brought the fun to South Florida over the annual weekend of Celtic celebration with its Inaugural Shamrock Shootout…

JOIN IN ON THE FUN! The Pelagic Tournament Series offers six events annually in some of the best sport fishing destinations worldwide... fish one or fish them all!

BELOW: what better way to celebrate St. Paddy's Day? 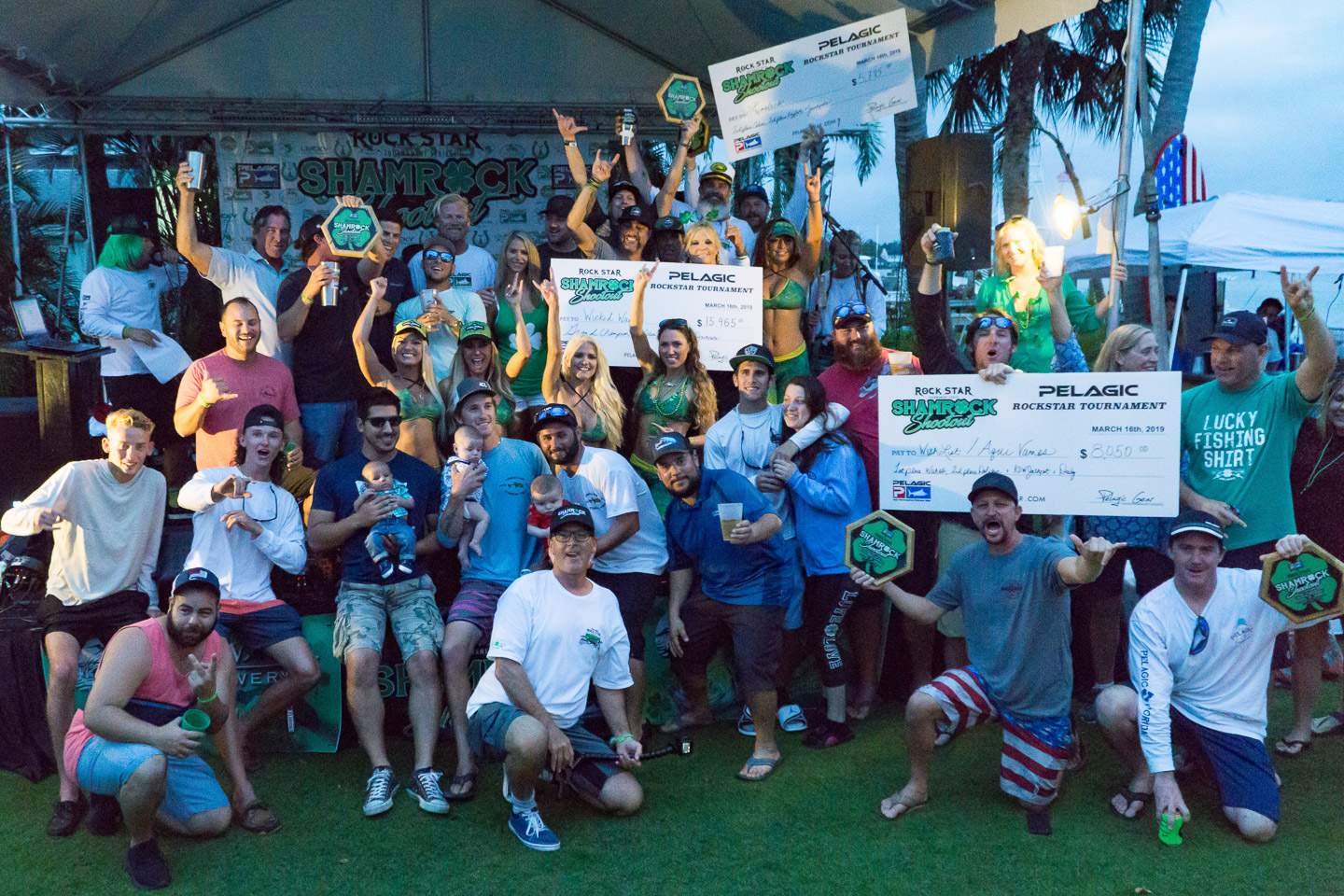 BELOW: the photo station was a hit... the PelagicGIRLs might've had something to do with that... // welcome "BOMBCHELLE", the beautiful 36' Yellowfin, to the PELAGIC Fleet - seen here during tournament kick-off at Sailfish Marina 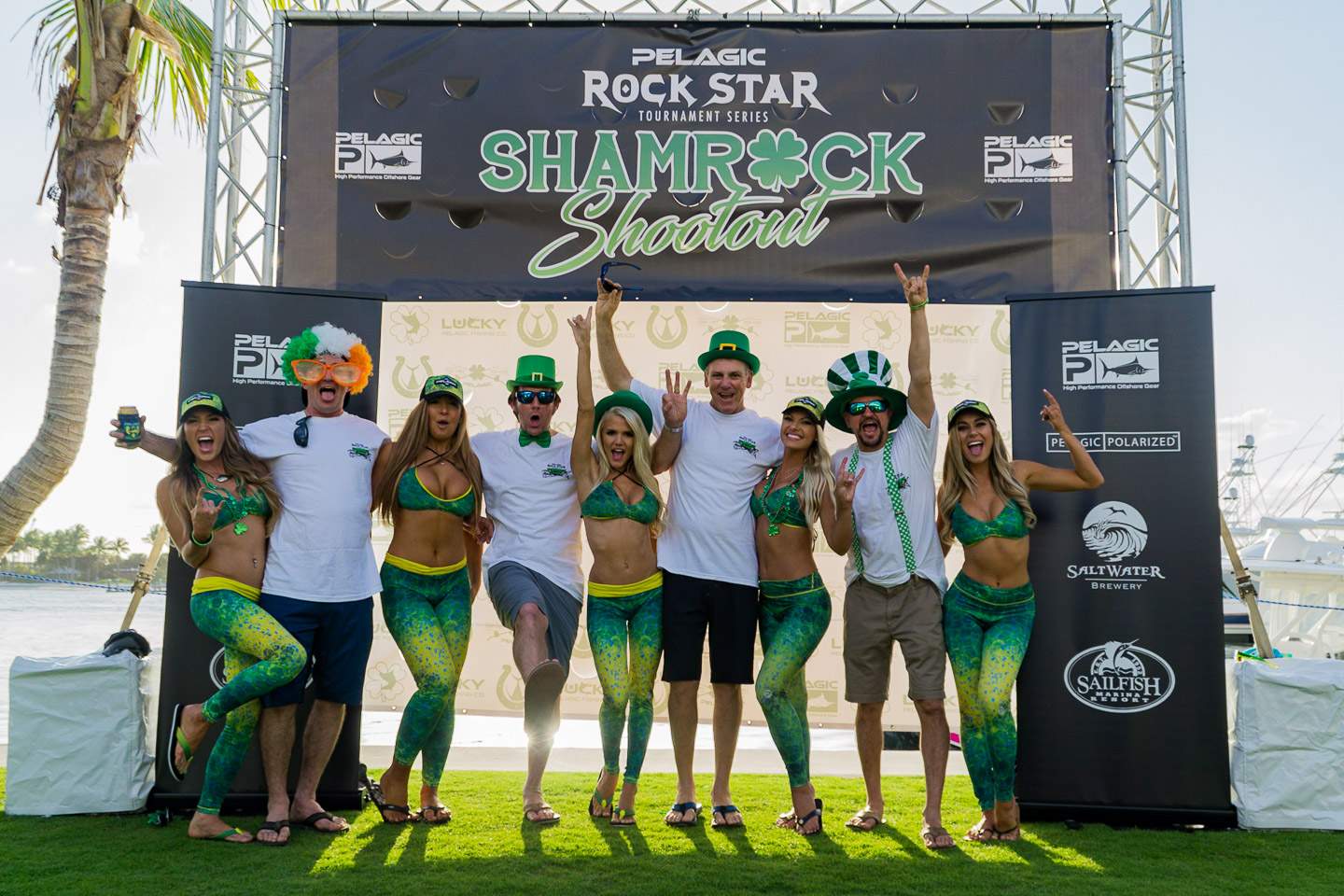 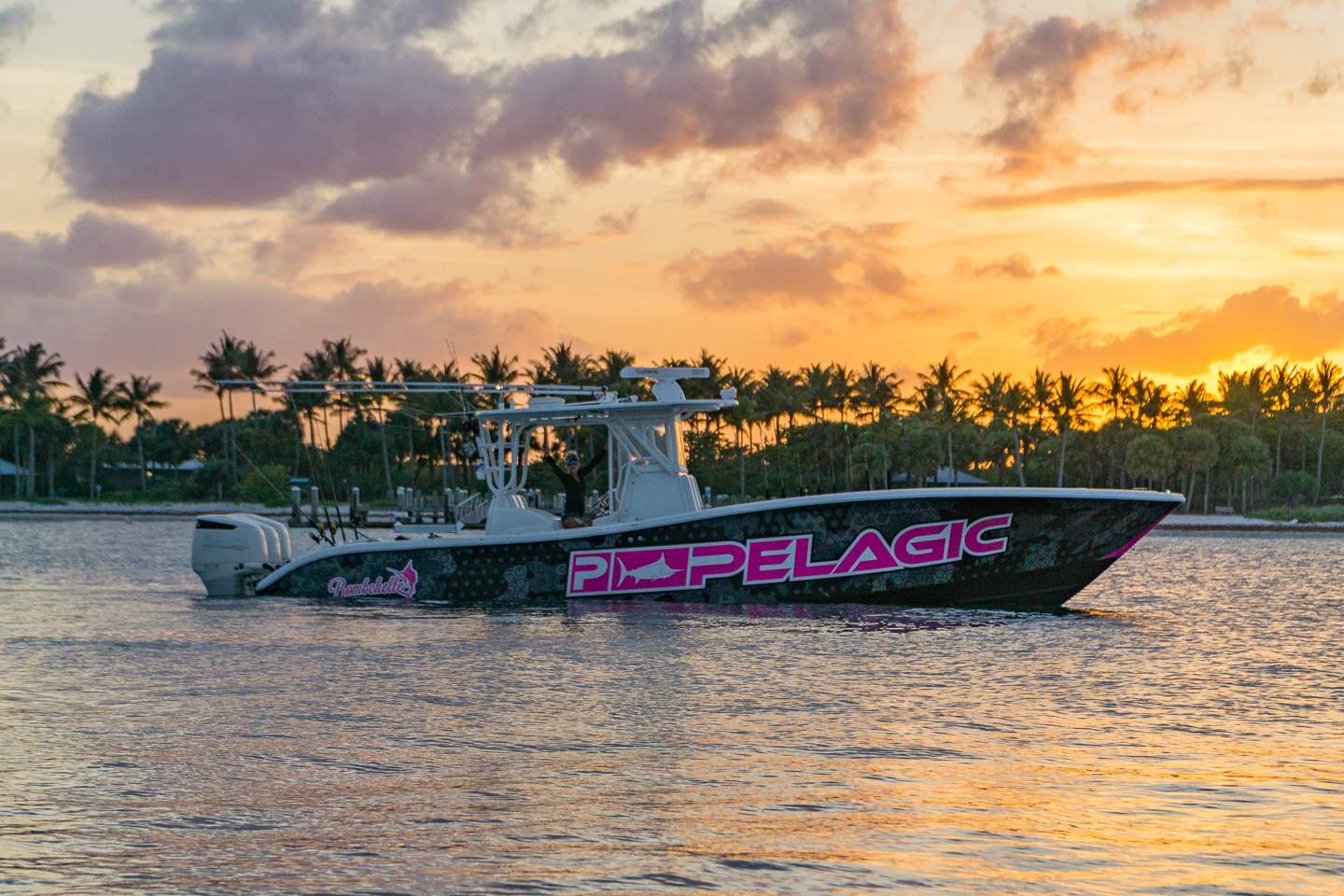 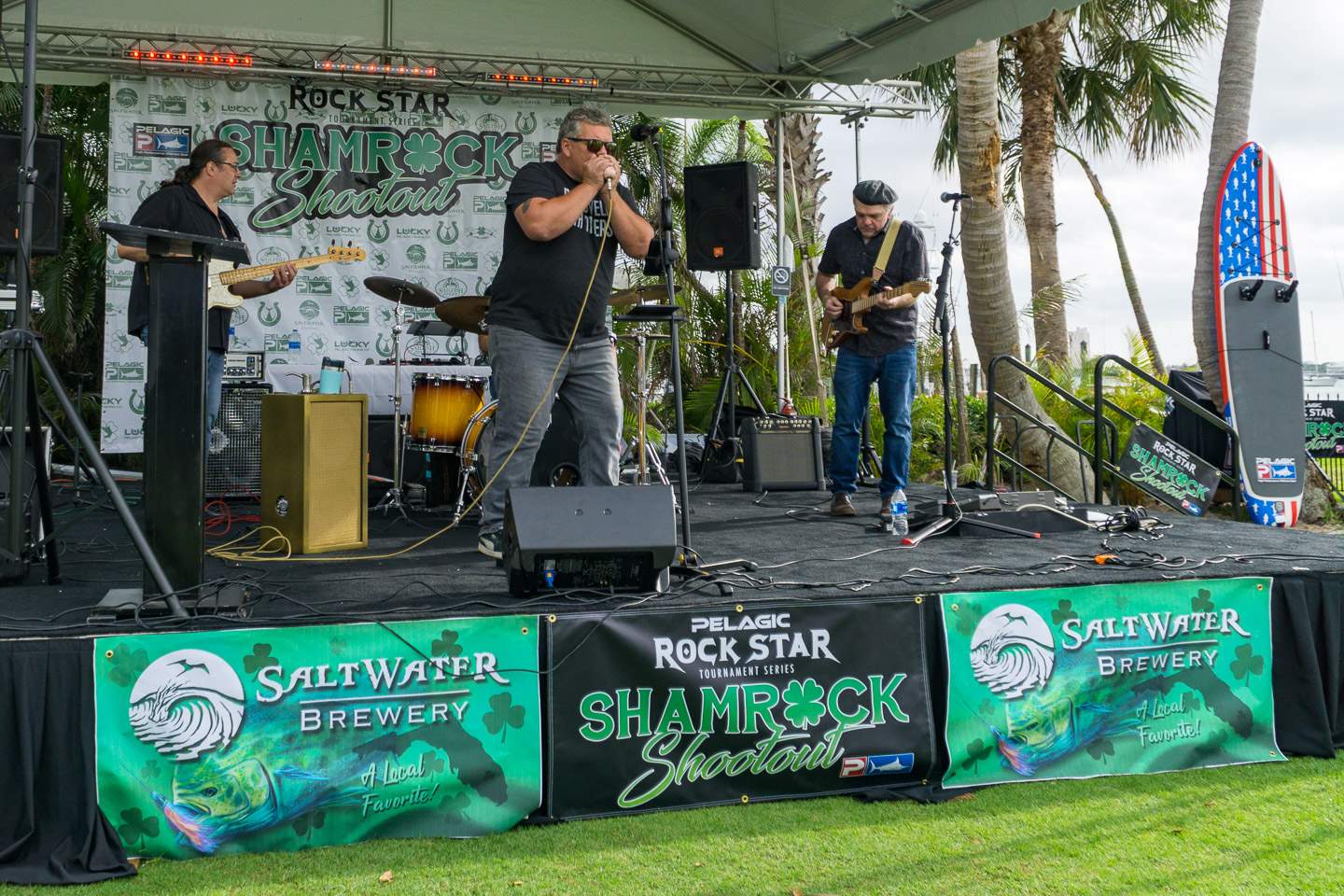 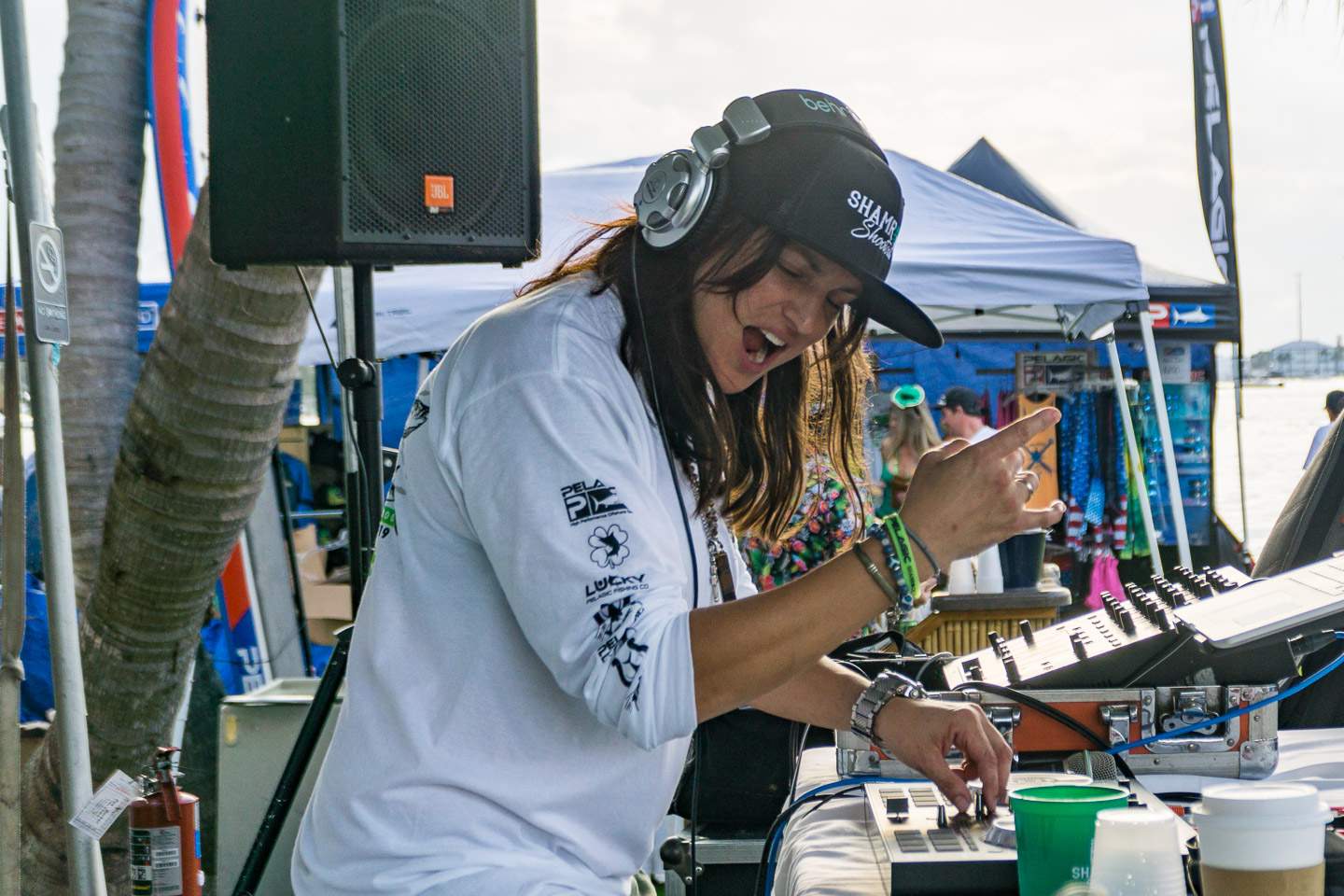 After registering for the event, anglers, captains, & crew dawned their favorite Irish garb for an official team photo in front of the tournament’s weigh station. In the theme of St. Paddy’s Day, our friends at Saltwater Brewery poured green beer for any of-age tournament patrons, while offering a six-pack of their most-popular canned brews to any team entered in the tournament. And, the beautiful Pelagic Girls hosted a super raffle – wearing their dolphin green, of course – where lucky winners took home some incredible prizes from Pelagic Gear, Pelagic Polarized, Saltwater Brewery, & Blackfin Rods.

BELOW: Blackfin Rods donated some goods to the super raffle // good times in tournament village during the kick-off party 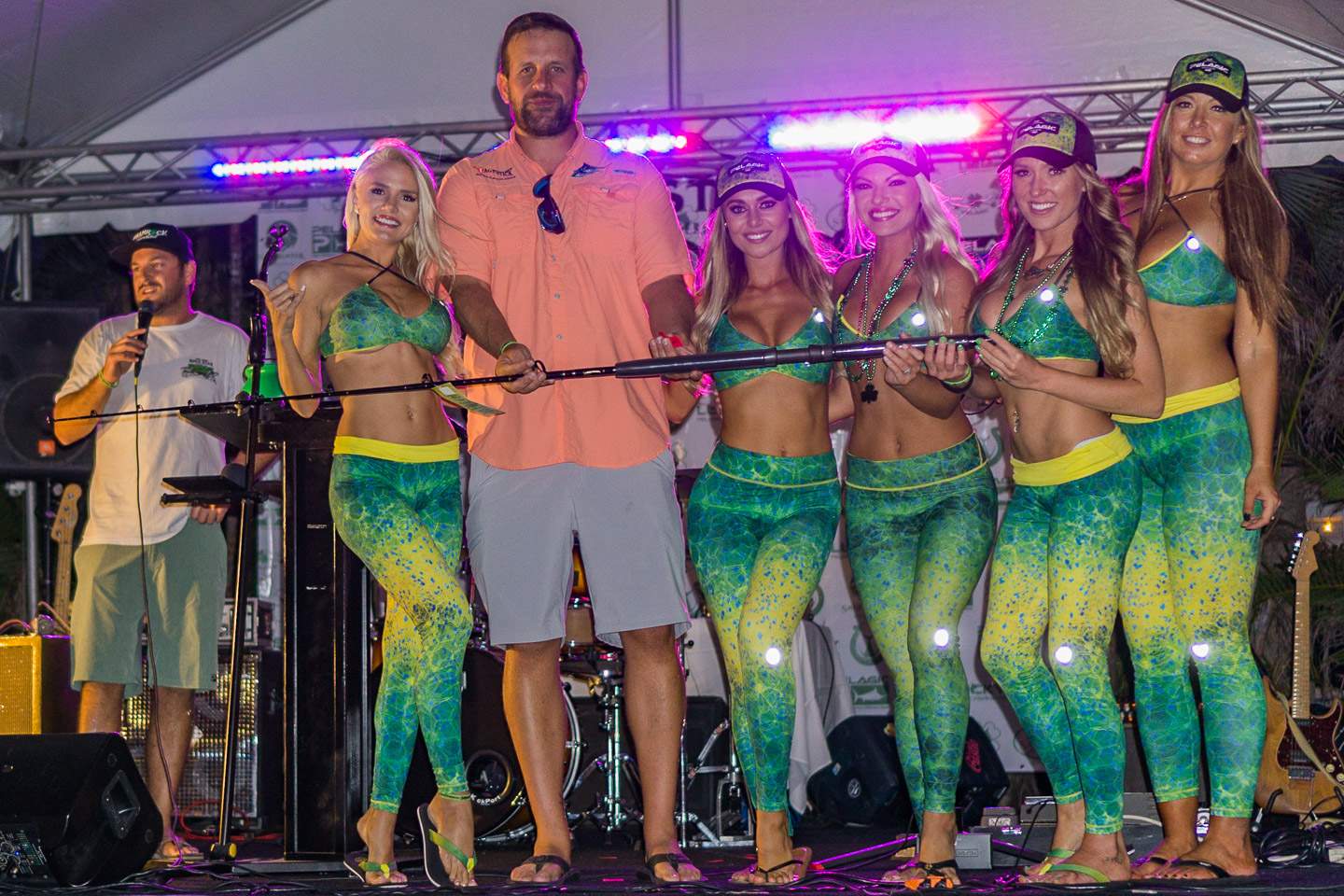 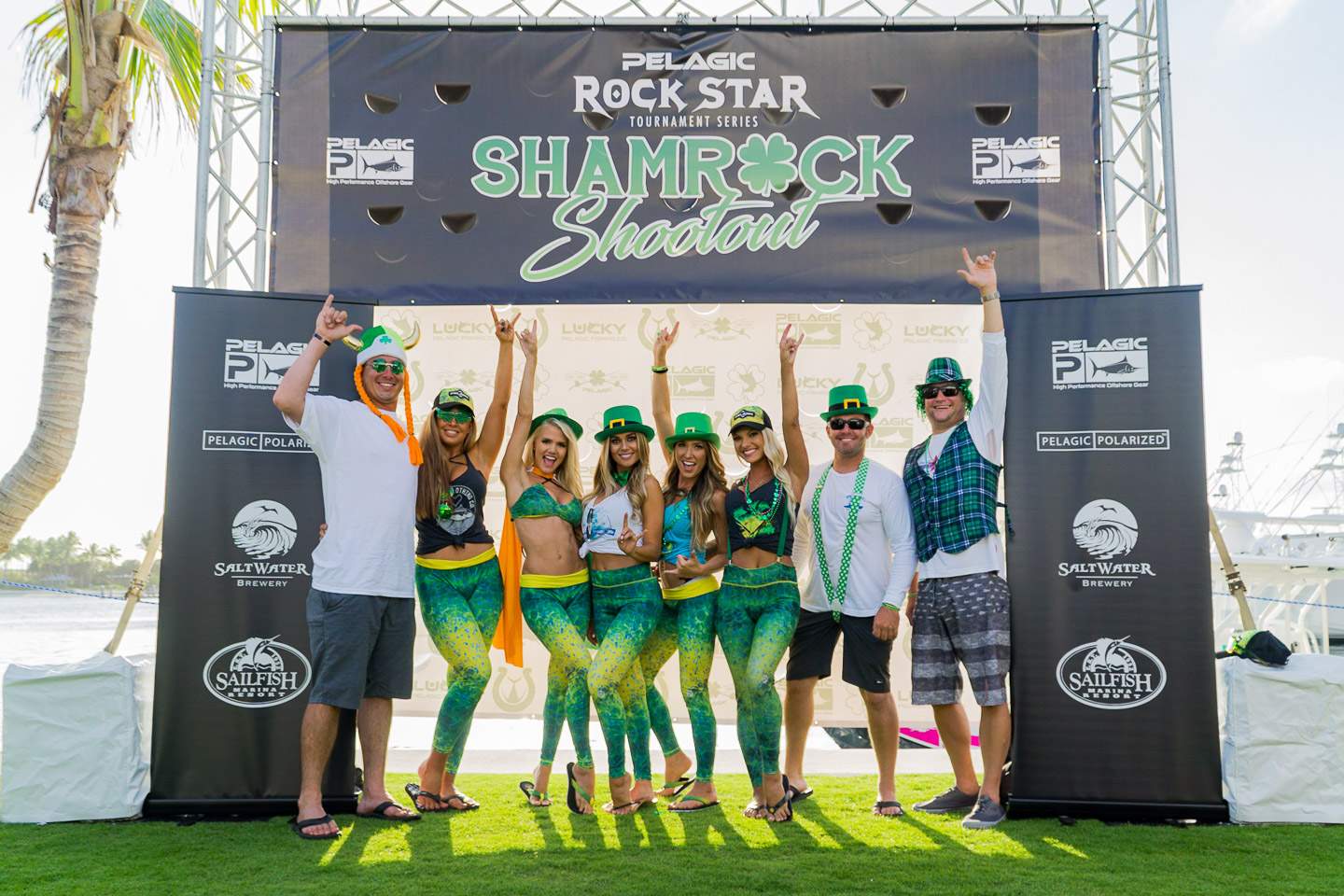 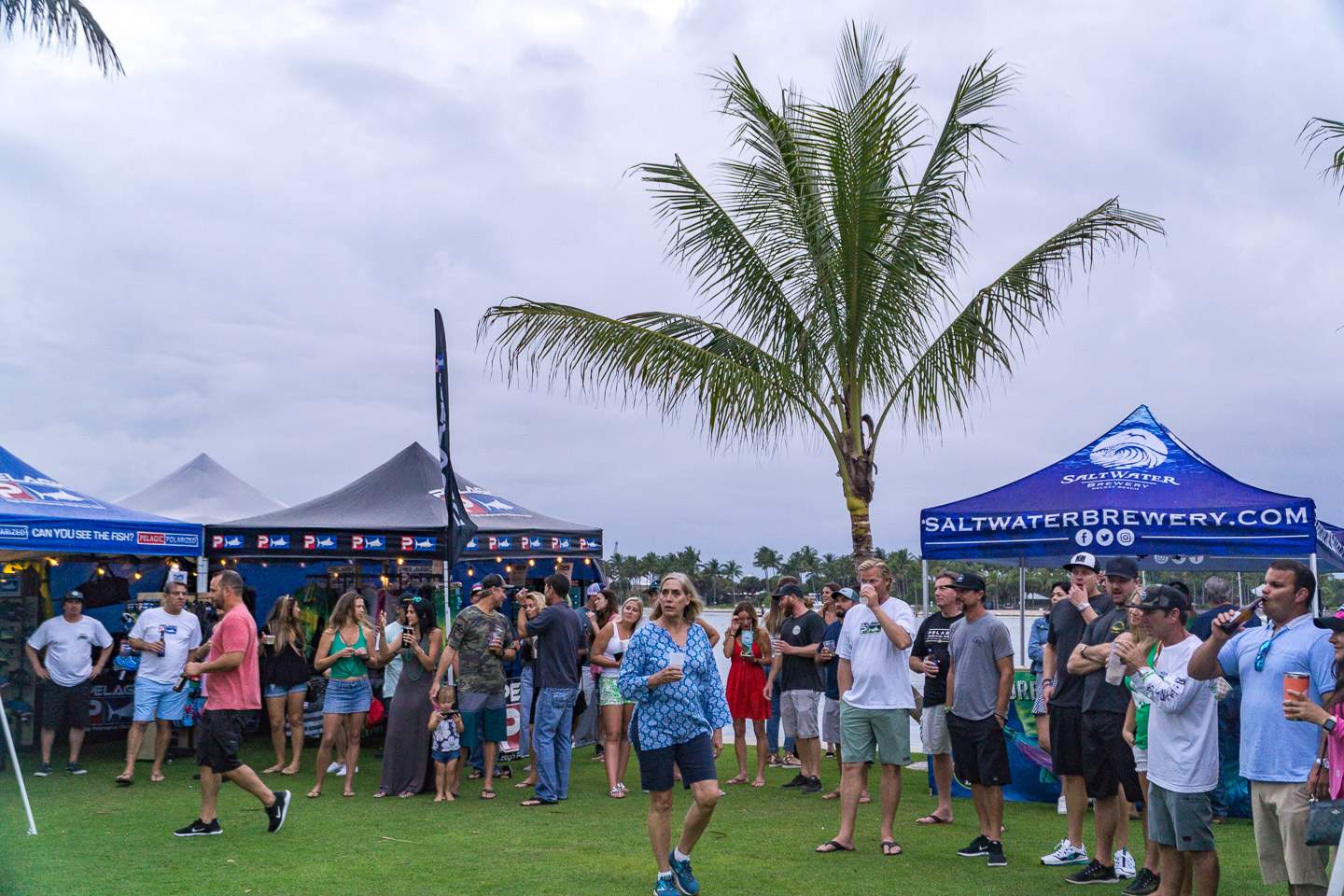 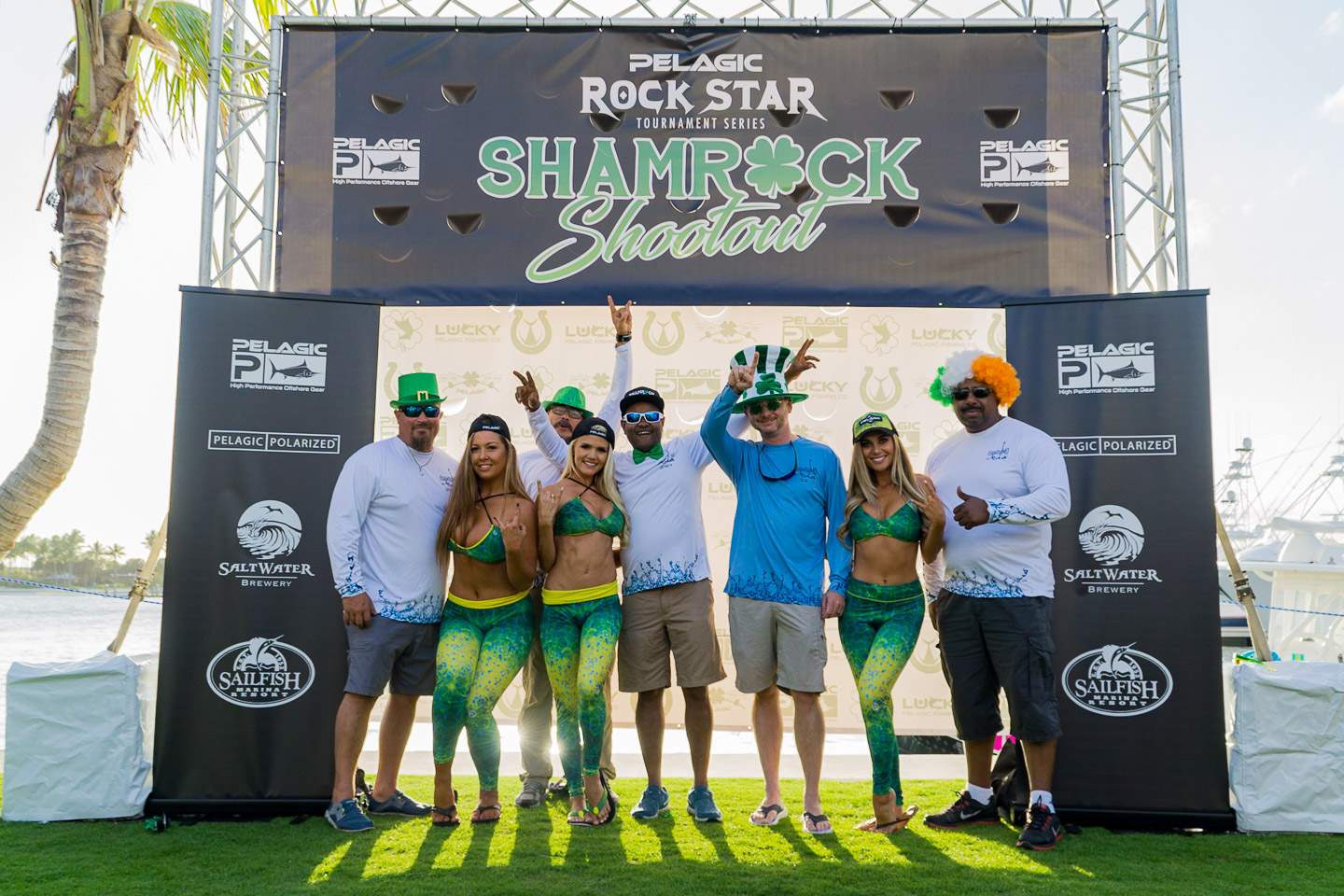 The tournament offered five divisions – kingfish, dolphin, wahoo, cobia, & blackfin – which all awarded 1st, 2nd, & 3rd place as part of general entry and based on heaviest overall fish per species. Teams were able to score a maximum of eight (8) fish per day, with a maximum of three (3) fish per species, per day. A cumulative two-day weight total was tallied for each team which would determine the tournament’s overall grand champion. Teams also had the chance to raise the stakes by purchasing any or all of the optional daily species calcuttas, and/or two-day cumulative total KDW, Big 3, or Pot ‘O Gold value-added jackpots.

BELOW: the Tournament Grand Champion trophy ready for the taking! 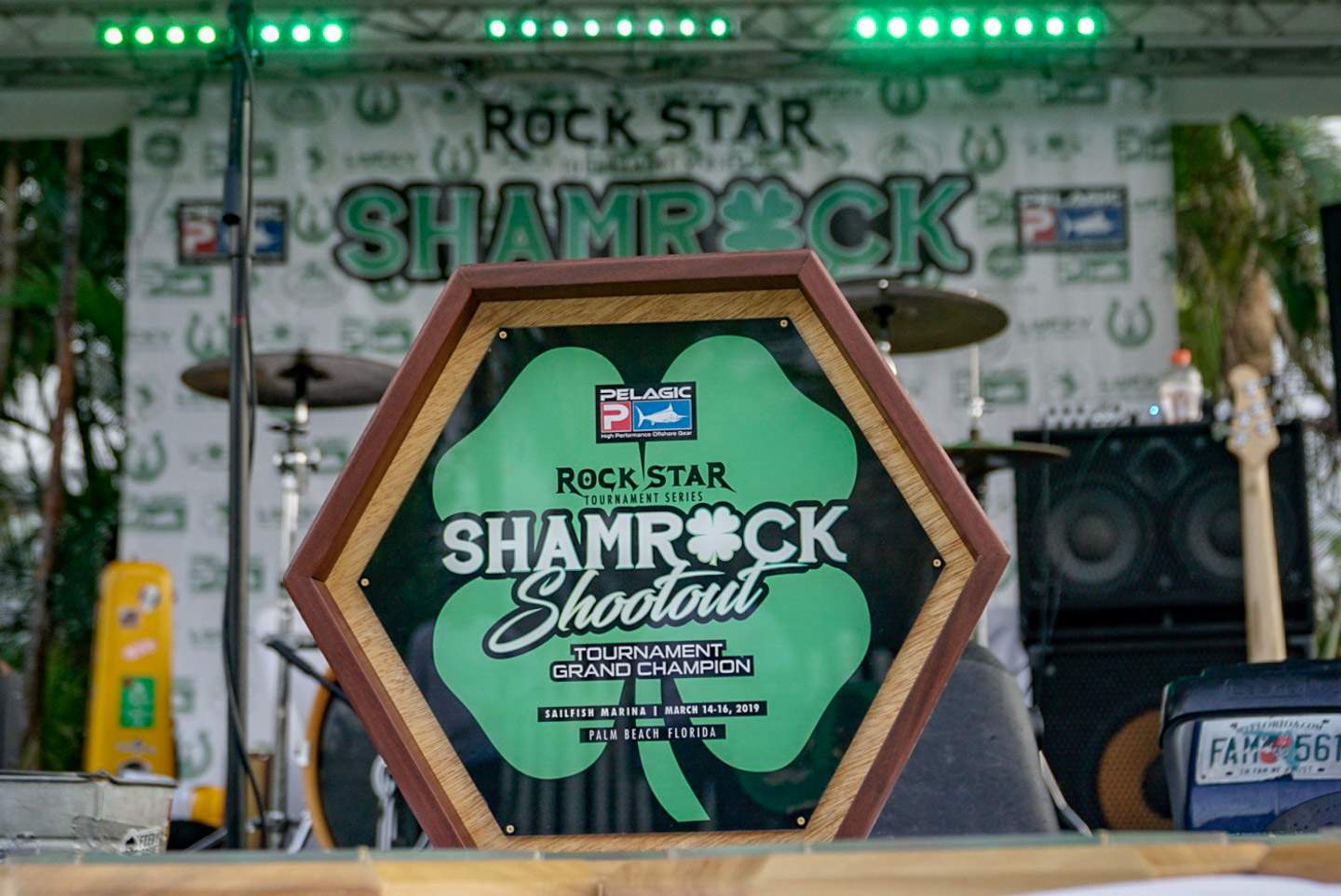 Fishing kicked off at sunrise the next day (March 15th) of the 2019 Shamrock Shootout, with an official lines-out time of 3:30pm. At the scales, each team brought their respective kingfish, dolphin, wahoo, cobia, & blackfin to be weighed and documented at the tournament’s official weigh station. Team Land O’ Lakes Marine was first to the scales with a 26.0 lb. kingfish, which held out as largest of the tournament. However, they were not entered into any of the daily calcuttas, so it was Team Lunatico that swept the kingfish dailies with their 23.5-lber to earn them $2,860 for the day.

BELOW: Teams Land 'O Lakes Marine and Lunatico weigh-in their day one kingfish 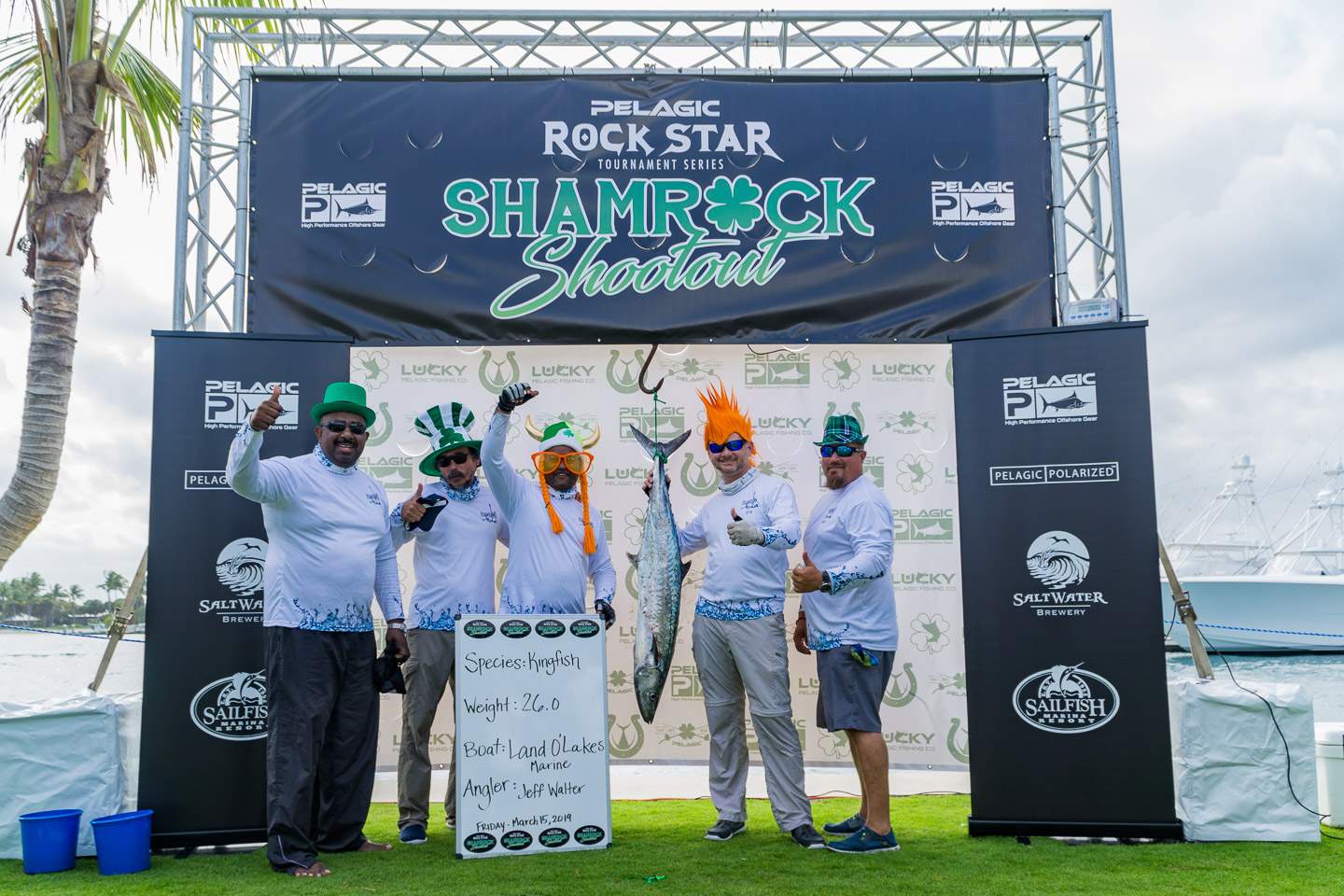 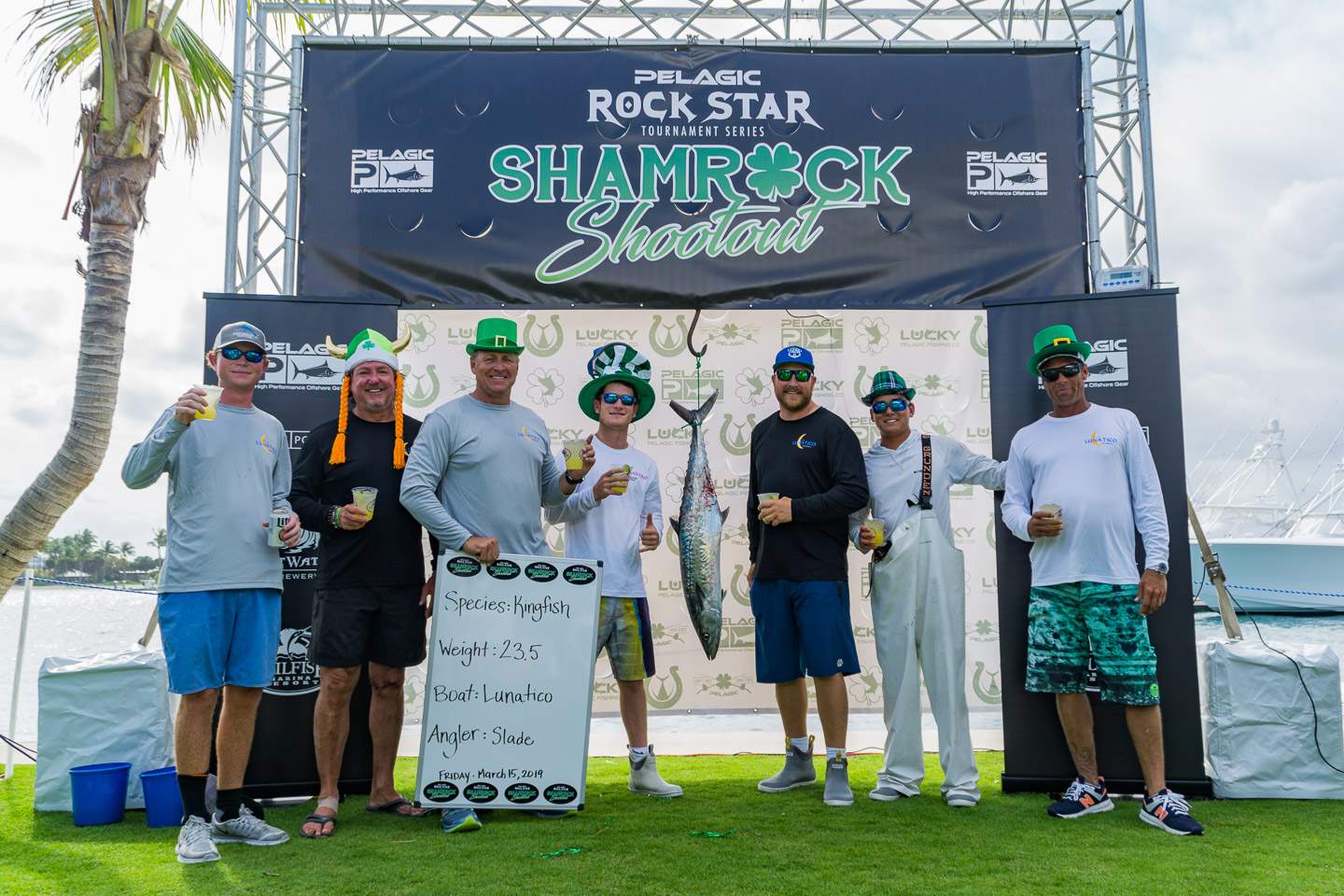 Team ¡Aqui Vamos! fished aboard Wishlist to take home multiple dolphin and wahoo dailies with 15.5 & 12.5 lb. fish respectively, earning them $2,040 for the day. And Team Wicked Wahine with Michael Barry & Kerry Burrus (AKA Billfish Girl) weighed-in the tournament’s largest cobia, a 35-lb. ling, to sweep the respective dailies for this species and $2,440.

BELOW: Team ¡Aqui Vamos! weighs in their KDW // Wicked Wahine scores the event's largest cobia // Team PelagicGIRL aboard "BOMBCHELLE" with a bevy of kings 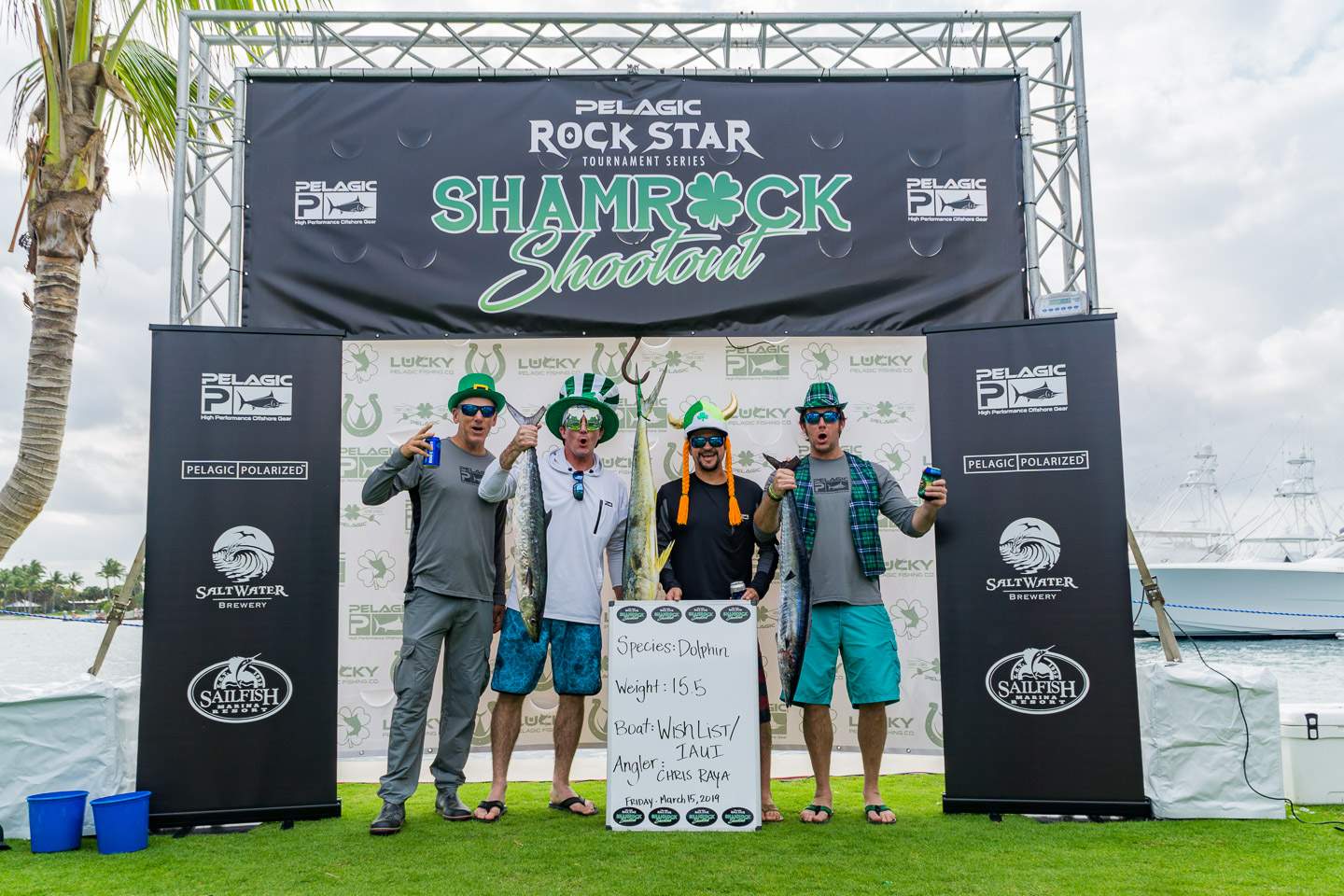 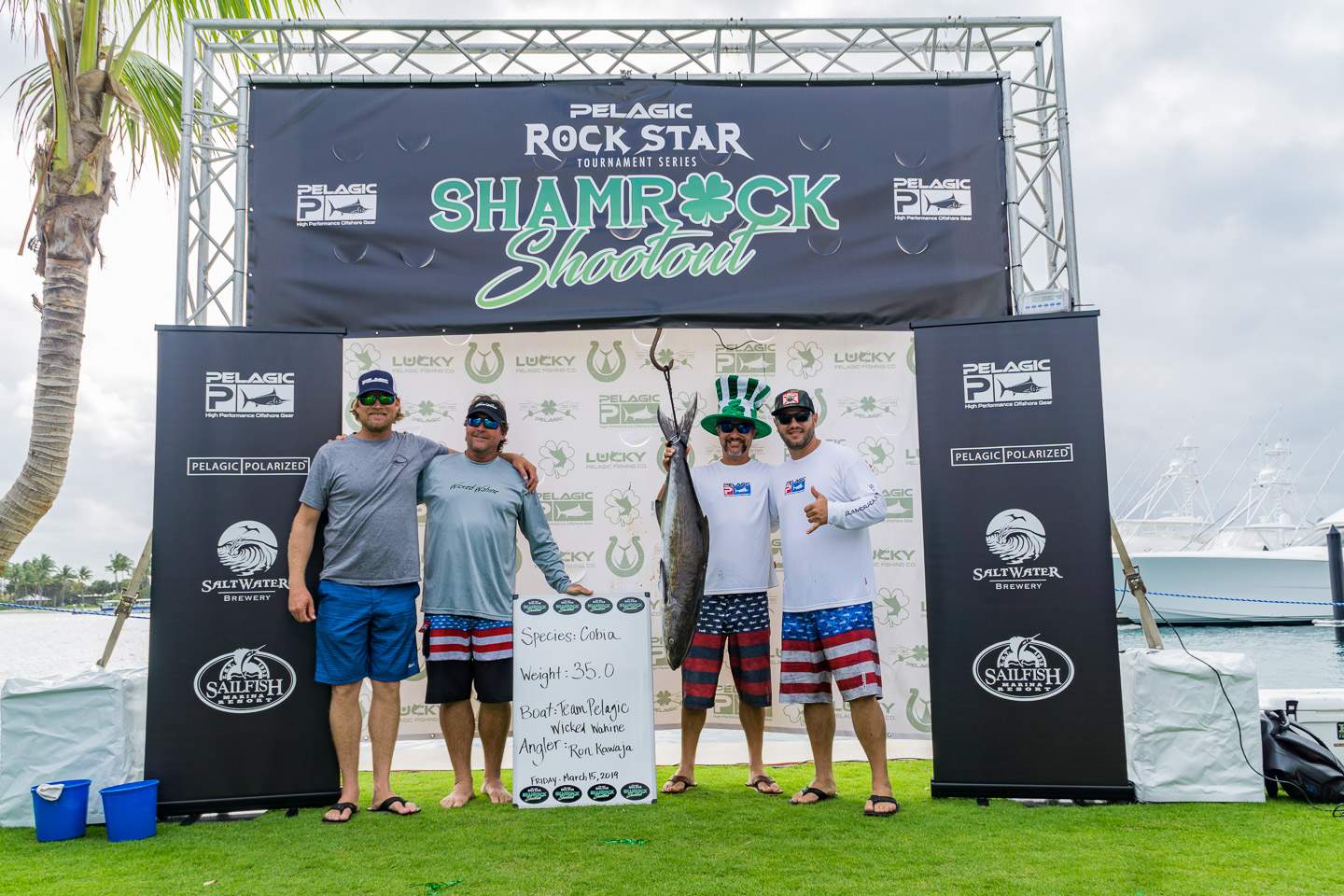 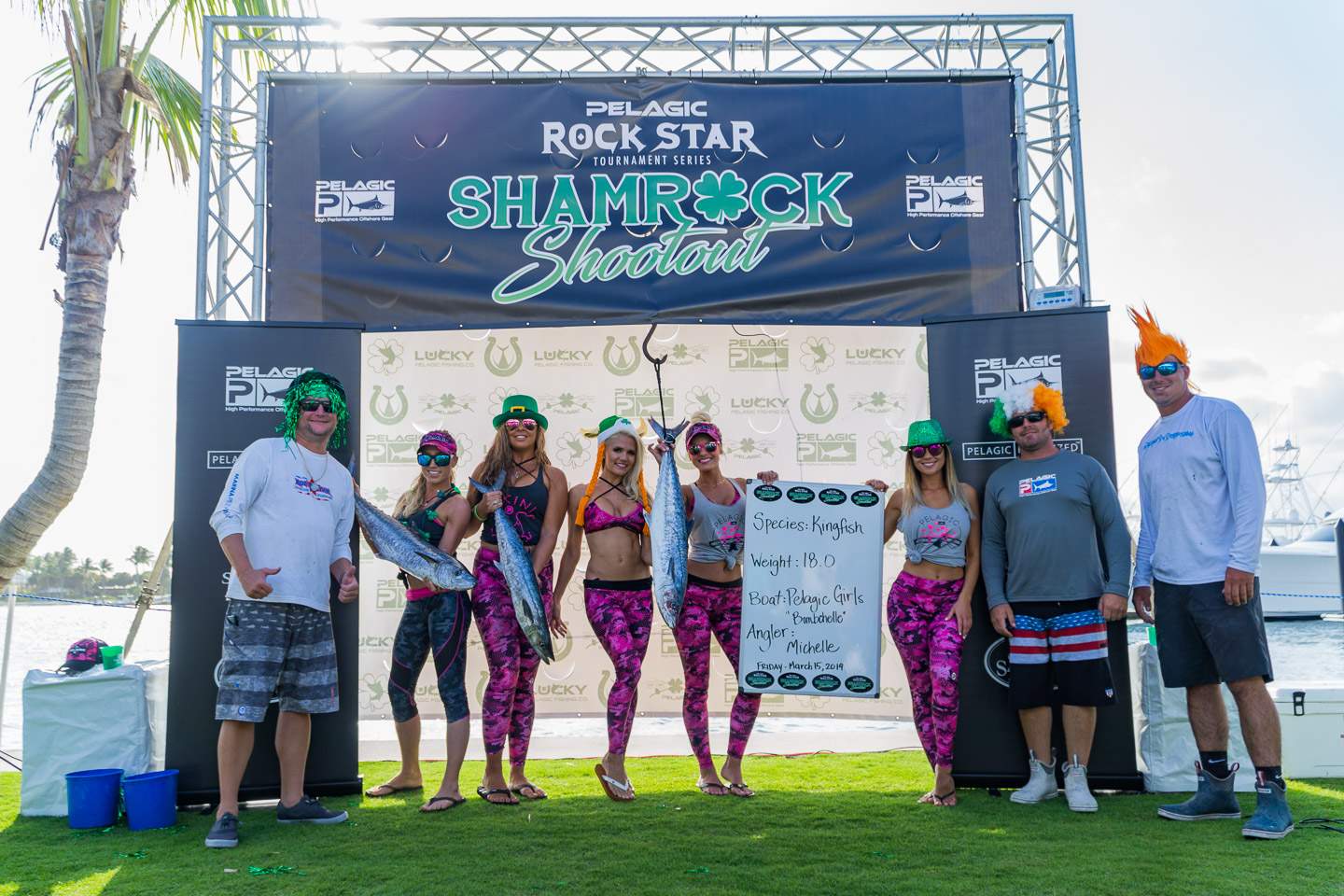 Day two of the tournament (March 16th) saw Team Lunatico once again sweep all levels of a species Calcutta; this time for a solid 23.4-lb. cobia to take home a daily of $2,440. Team Wicked Wahine swept the daily kingfish jackpots with a 10.0-lb. fish to win $2,860 for the day.

BELOW: although yellowfin were not a part of this year's scoring format, we saw a stud 146-lb. tuna hit the scales! 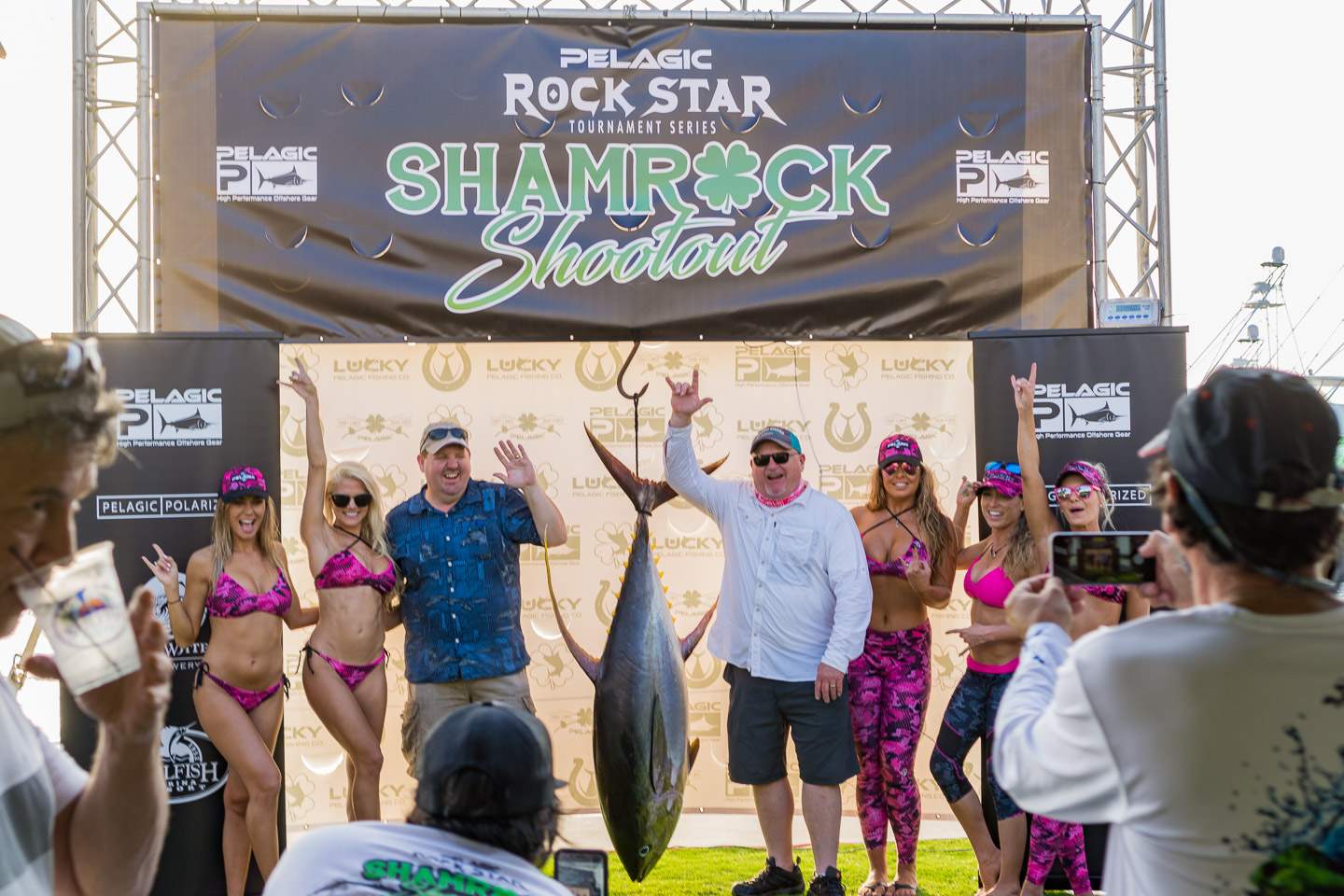 At the end of the two-day tournament, all weights were tallied and the Inaugural Shamrock Shootout winners were celebrated on the main stage…

Taking home the crown as the first-ever Shamrock Shootout Tournament Grand Champion was Team Wicked Wahine ! Their combined weight total of 67.5-lbs. earned them top honors in this inaugural event; and, along with winning 1st Place in the Cobia Division, as well as daily calcuttas, and the Big 3 & Pot ‘O Gold value-added jackpots, Wicked Wahine took home a total prize of $15,465. Congrats to Michael Barry, Kerry Burrus, and the crew on tournament victory!

BELOW: Team Wicked Wahine cashes in as Tournament Grand Champions 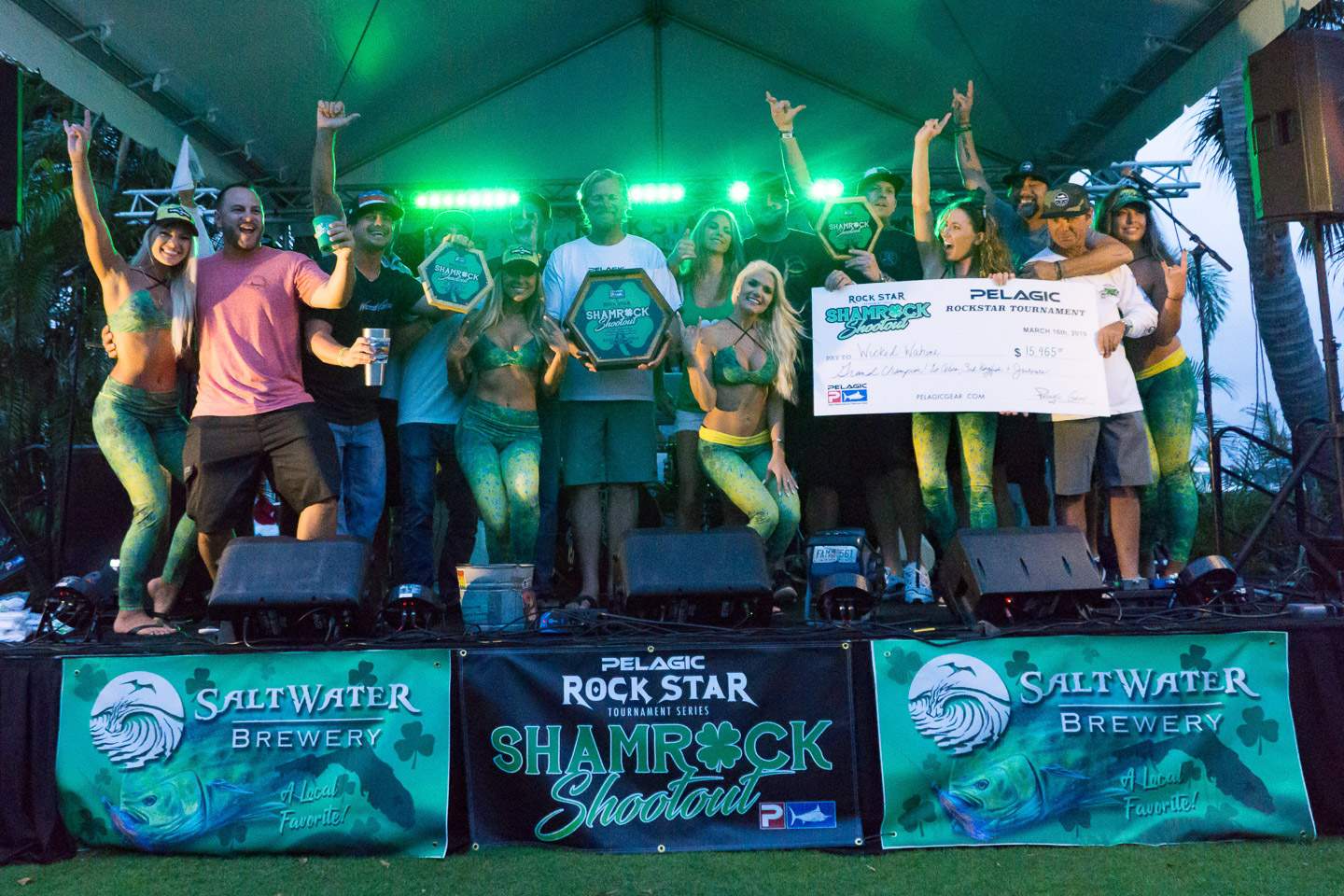 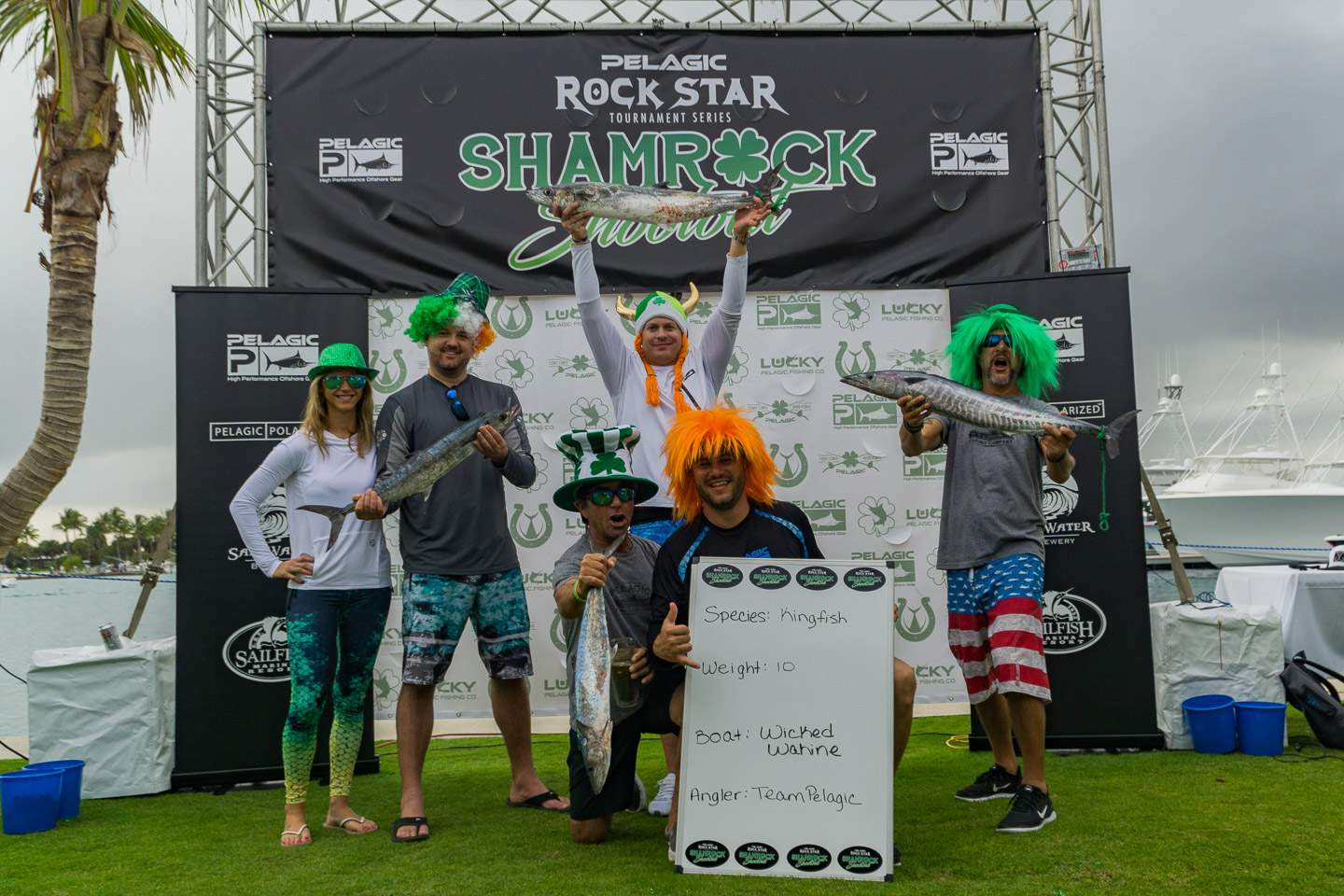 Team ¡Aqui Vamos! claimed the trophy for 1st Place Wahoo and successfully secured the KDW (kingfish, wahoo, dolphin) Jackpot by securing the heaviest combined weight of one of each species (40.0-lbs) to take home a check for $8,050.

BELOW: ¡Aqui Vamos! takes the stage in style awarded trophies and their ceremonial check by the PelagicGIRLs 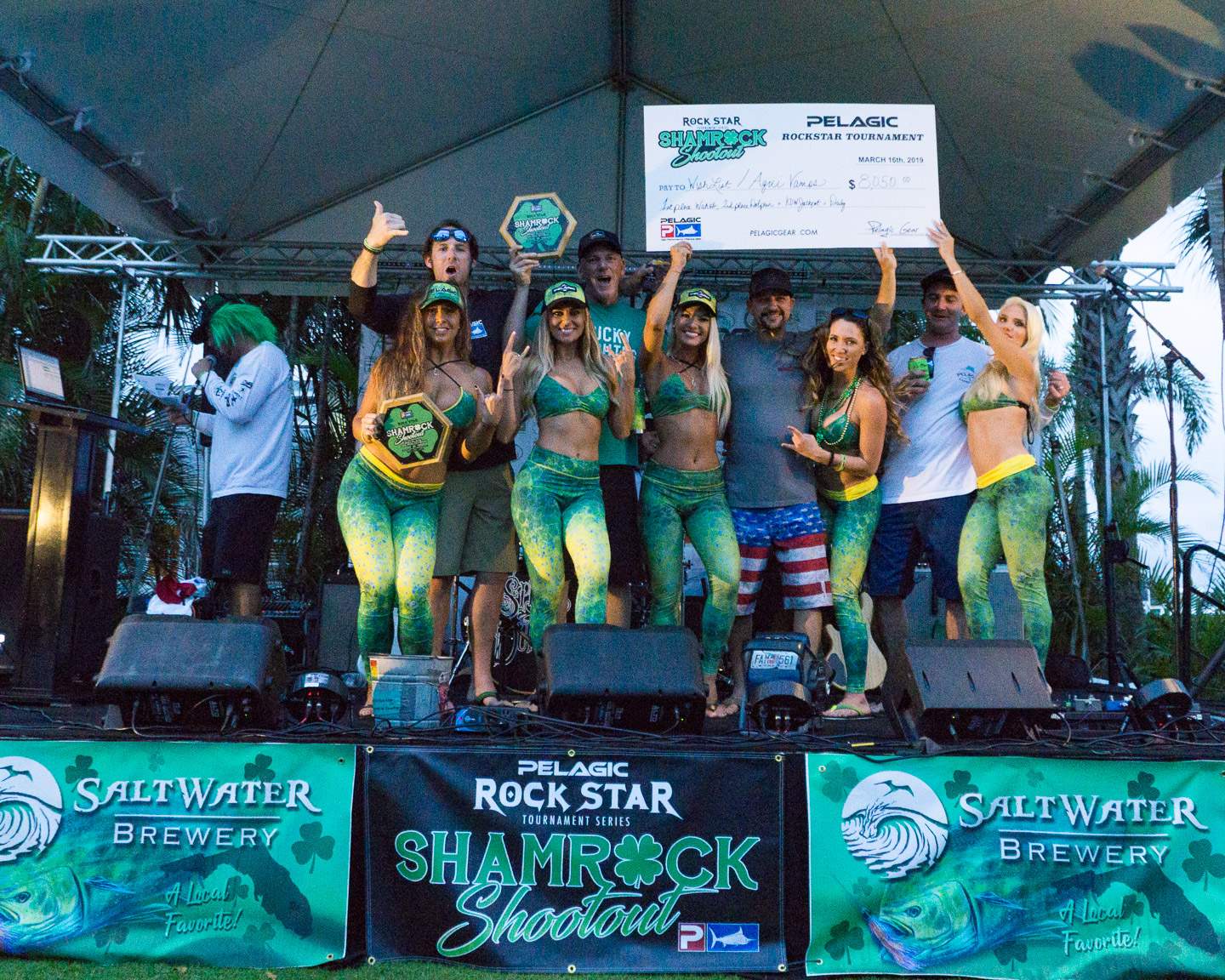 Something in the Water earned a check for $630 by weighing the tournament’s heaviest dolphin – a beautiful 23.2-lb. fish to lock down a 1st Place Dolphin trophy. Team Land ‘O Lakes Marine took home 1st Place in the tournament’s Kingfish Division with their 26.0-lb. kingy to win $585.

BELOW: Something in the Water & Land 'O Lakes Marine awarded their respective 1st Place trophies 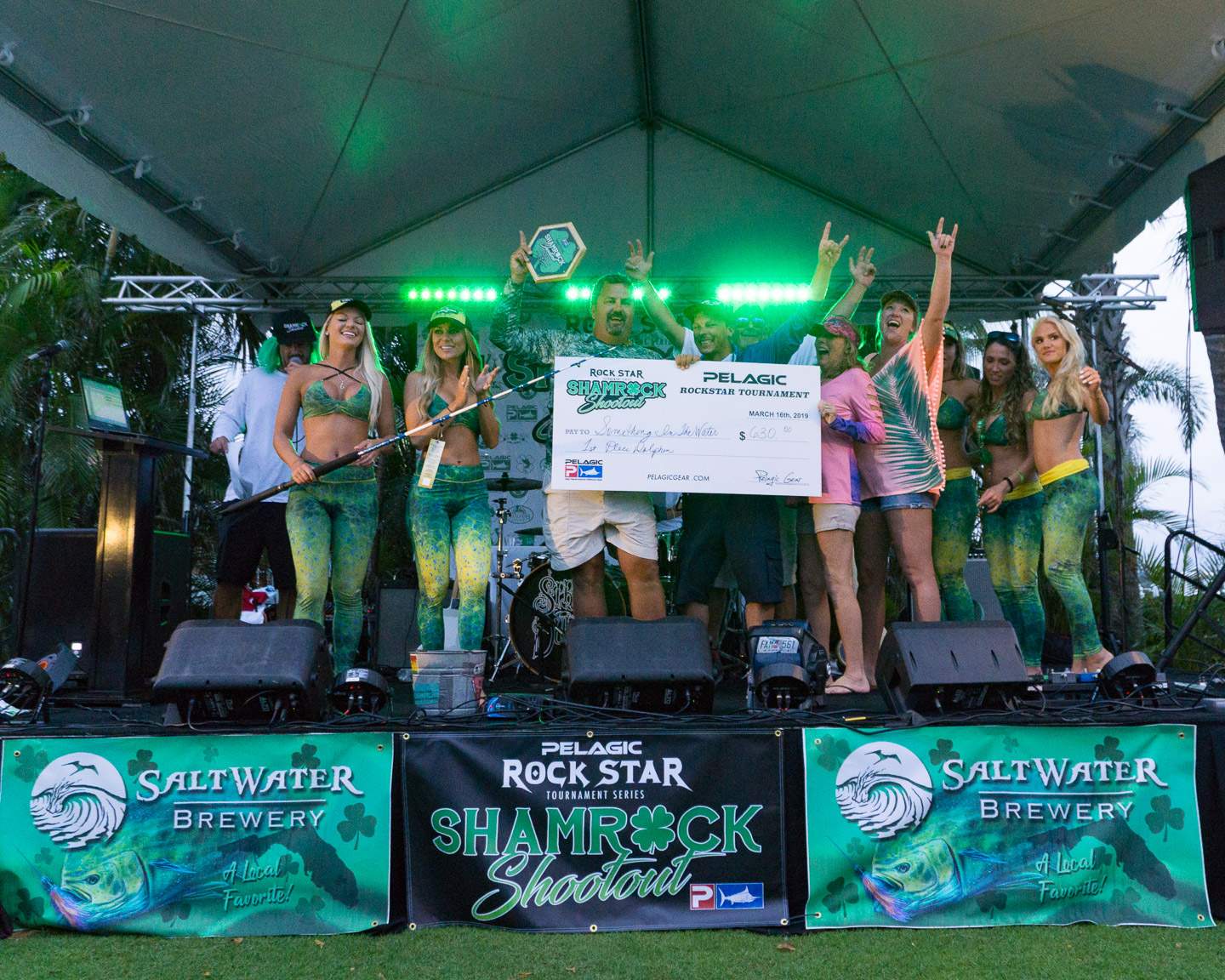 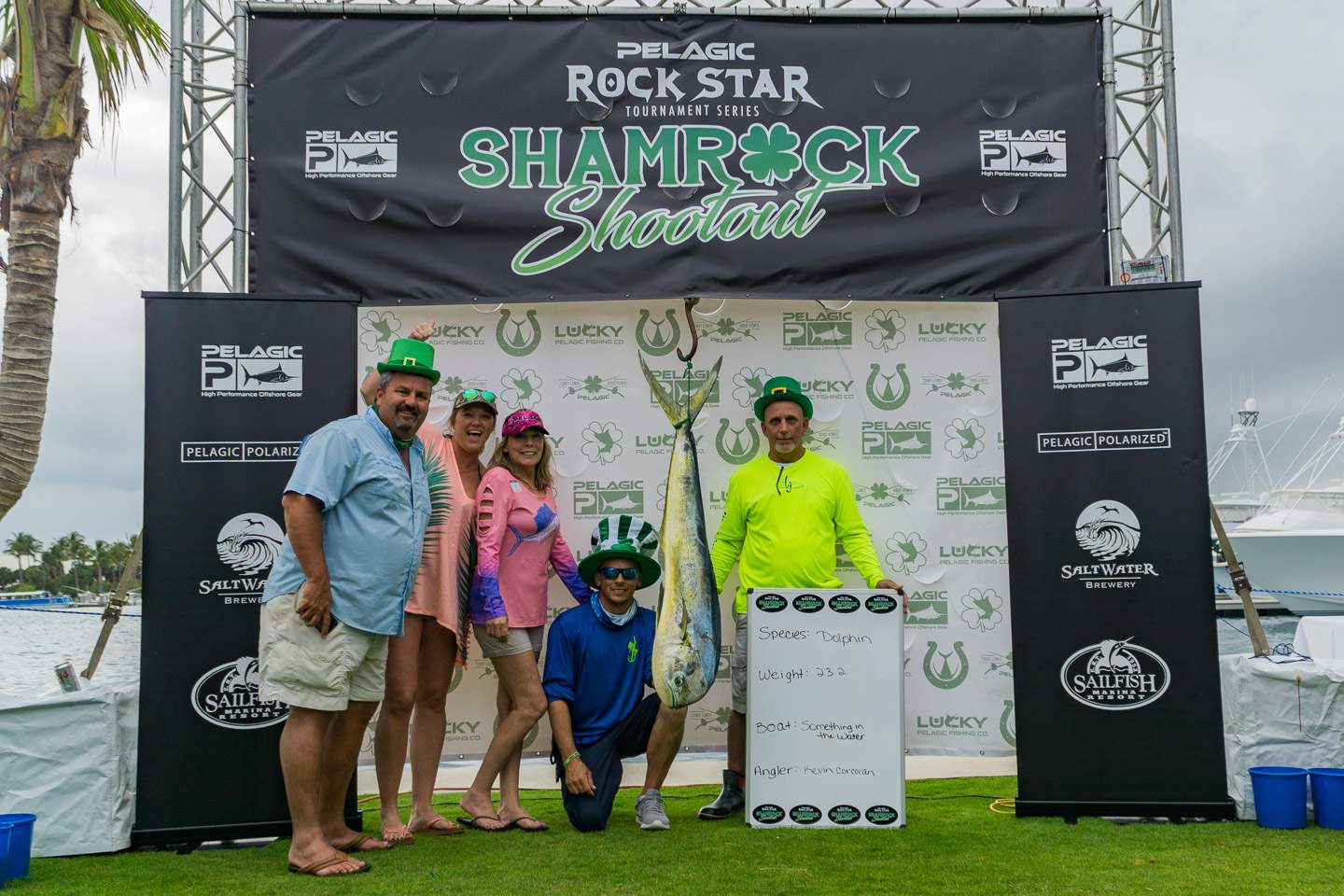 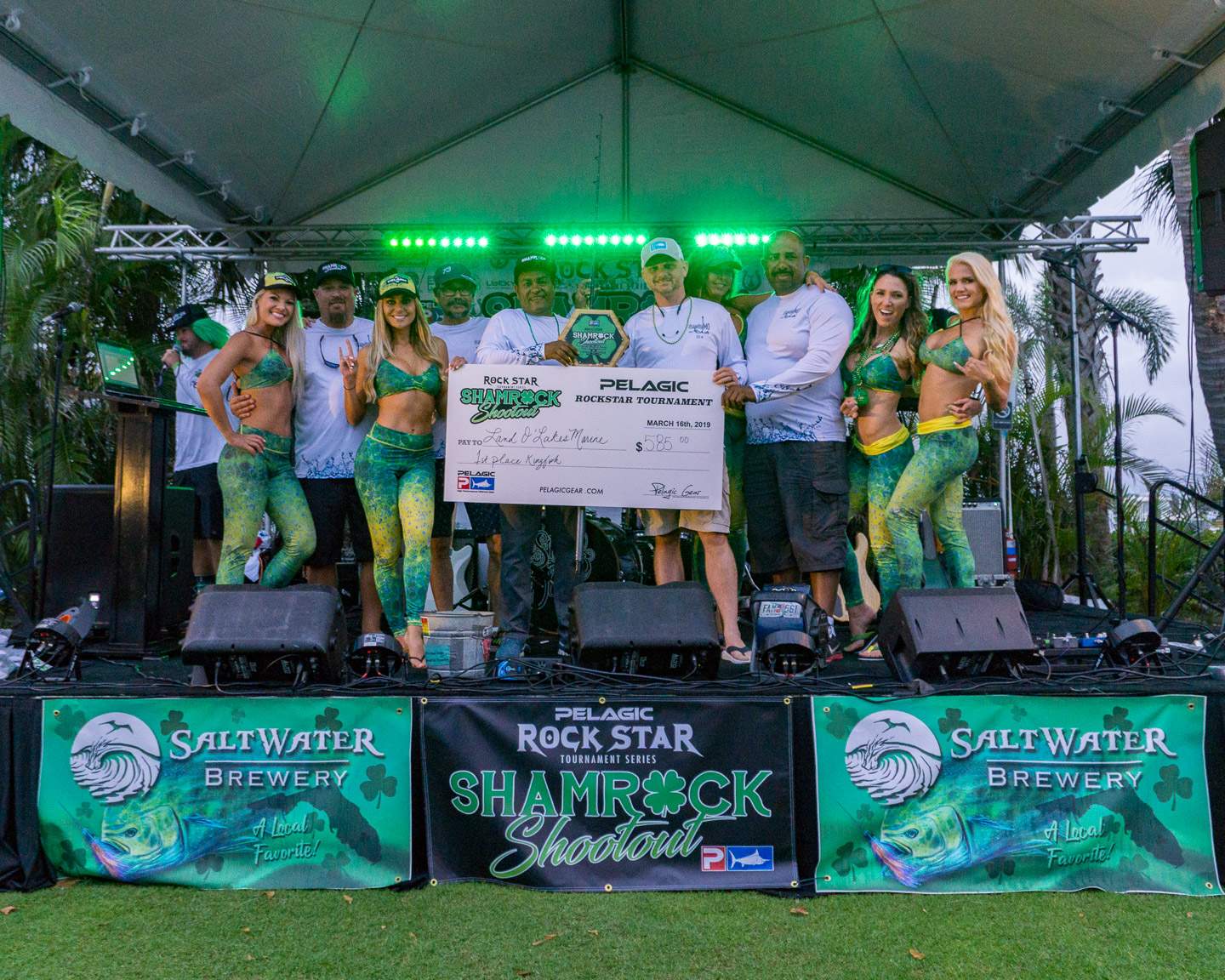 Showing that it pays off to enter in multiple calcuttas and jackpots was Team Lunatico . While they didn’t claim any first place trophies, their respective sweeps of daily kingfish and cobia calcuttas, along with a couple 2nd place division trophies, they took home a check for $5,795!

BELOW: Team Lunatico all smiles with their tournament performance 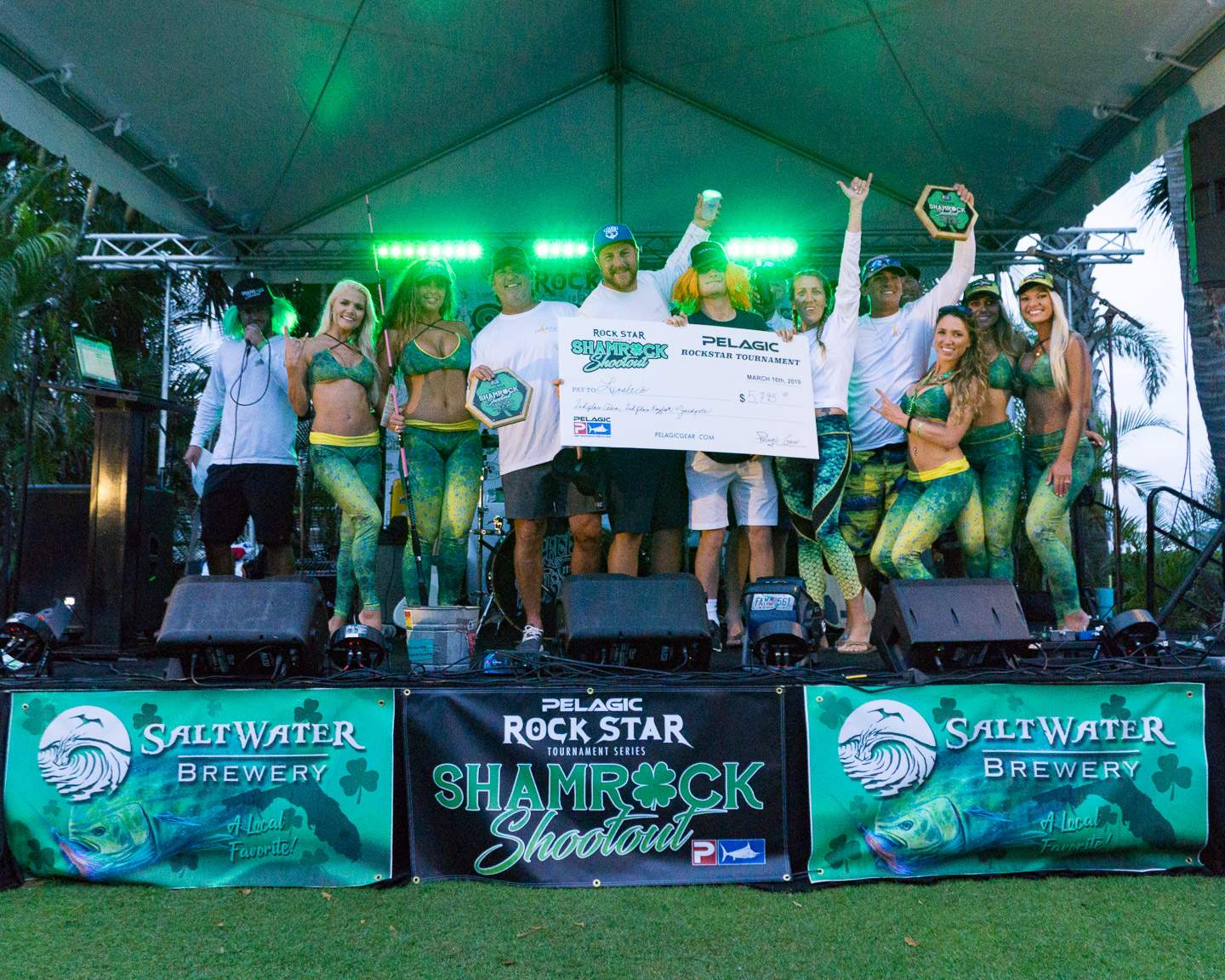 After the award’s ceremony, well-known reggae/ska band, Spred the Dub , performed an awesome “good-time reggae” set on the Shamrock Shootout main stage. The vibes were high as tournament participants enjoyed the tropical tunes while tipping back a few green beers from our tournament partners at Saltwater Brewery.

BELOW: Spred the Dub keeps the St. Paddy's Day vibes going on the tournament's final eve 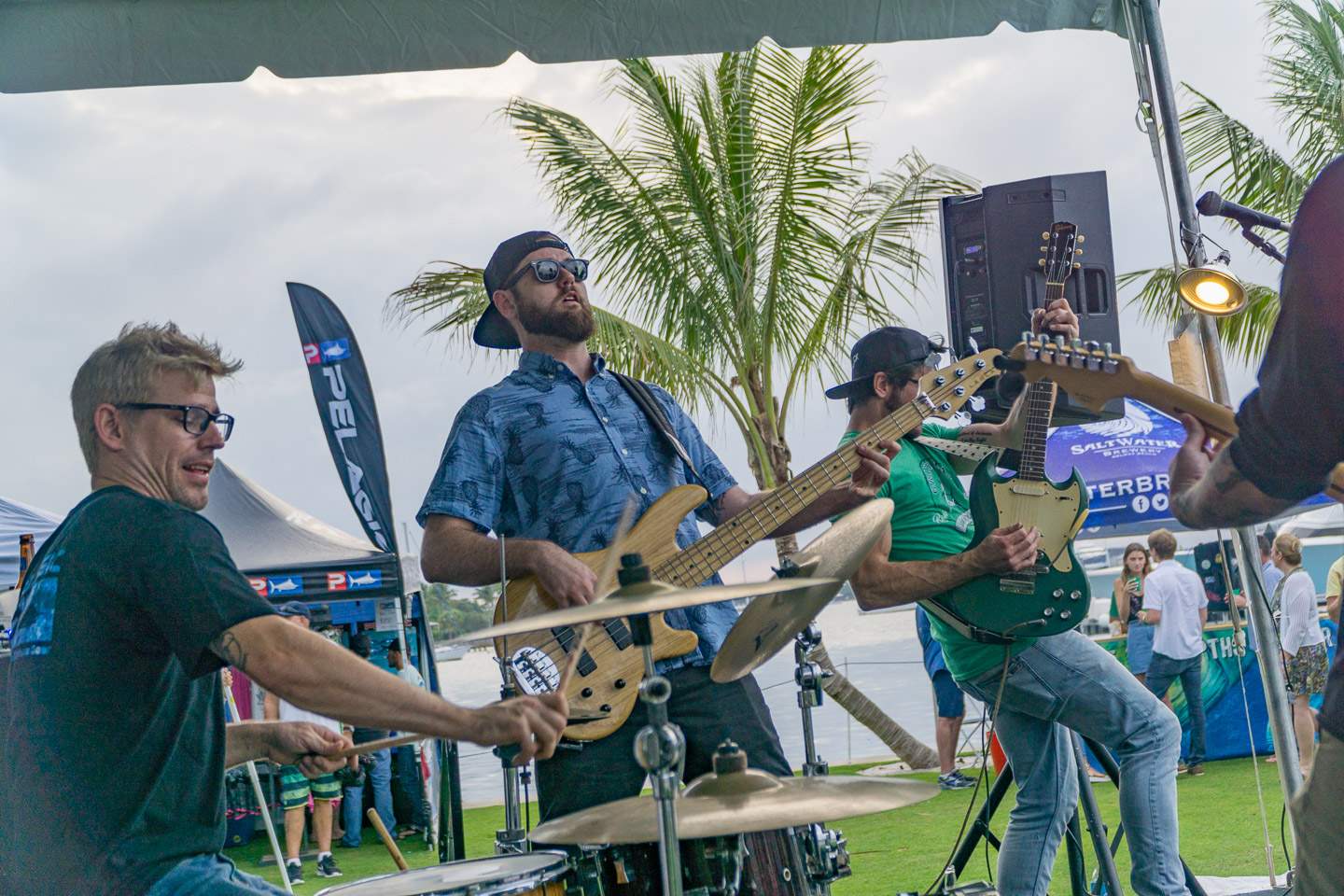 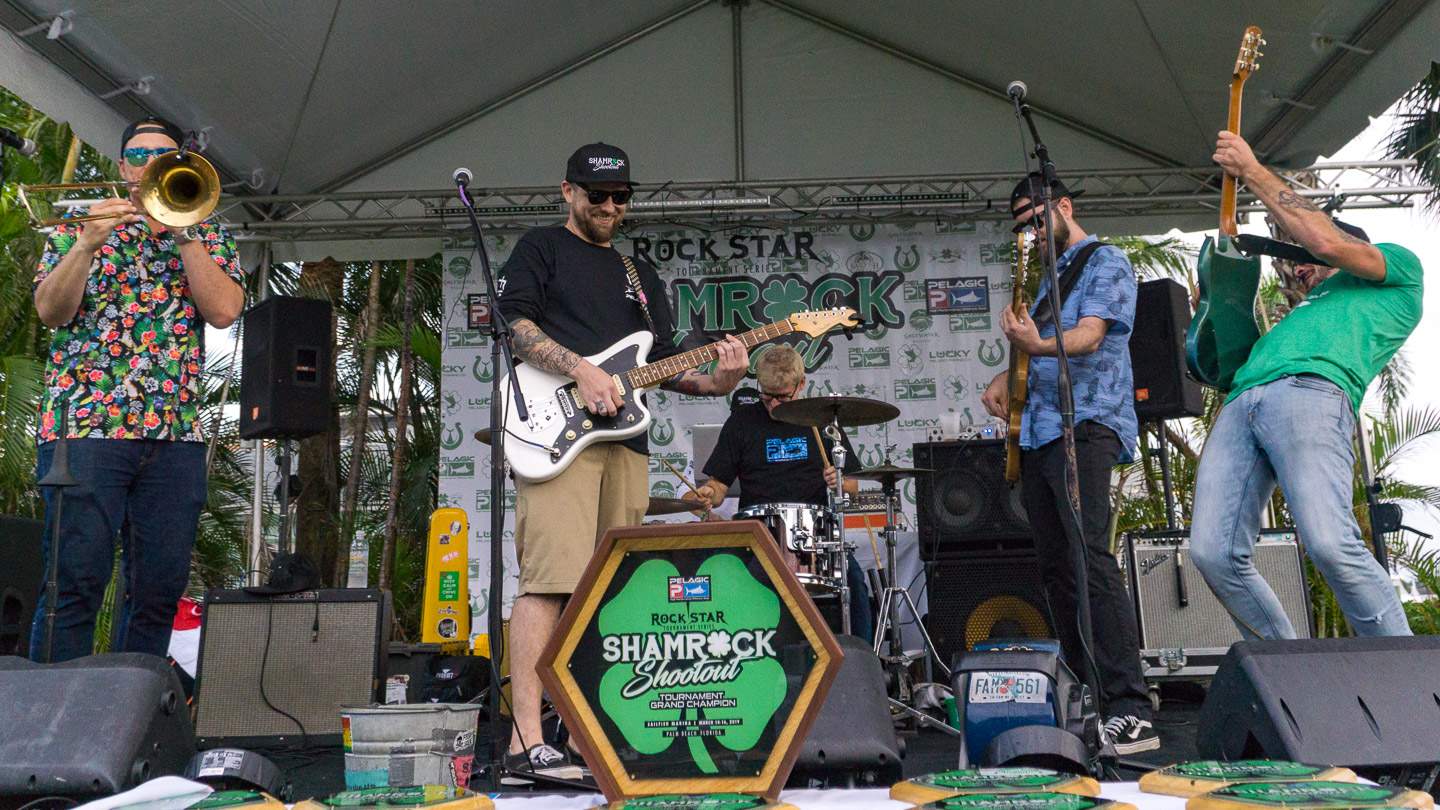 The PELAGIC Rockstar Tournament Series and the Shamrock Shootout would like to send out a big thanks to all those who fished with us in this Inaugural event. Special thanks goes to Sailfish Marina for being such gracious hosts and providing an incredible venue to grow this tournament year after year. Thanks to Saltwater Brewery for pouring their hoppy libations all weekend, and to Blackfin Rods for providing our tournament winners with a top-notch fishing rod.

We’ll see you all next year for the 2nd Annual Shamrock Shootout on St. Paddy’s Day Weekend 2020 ! 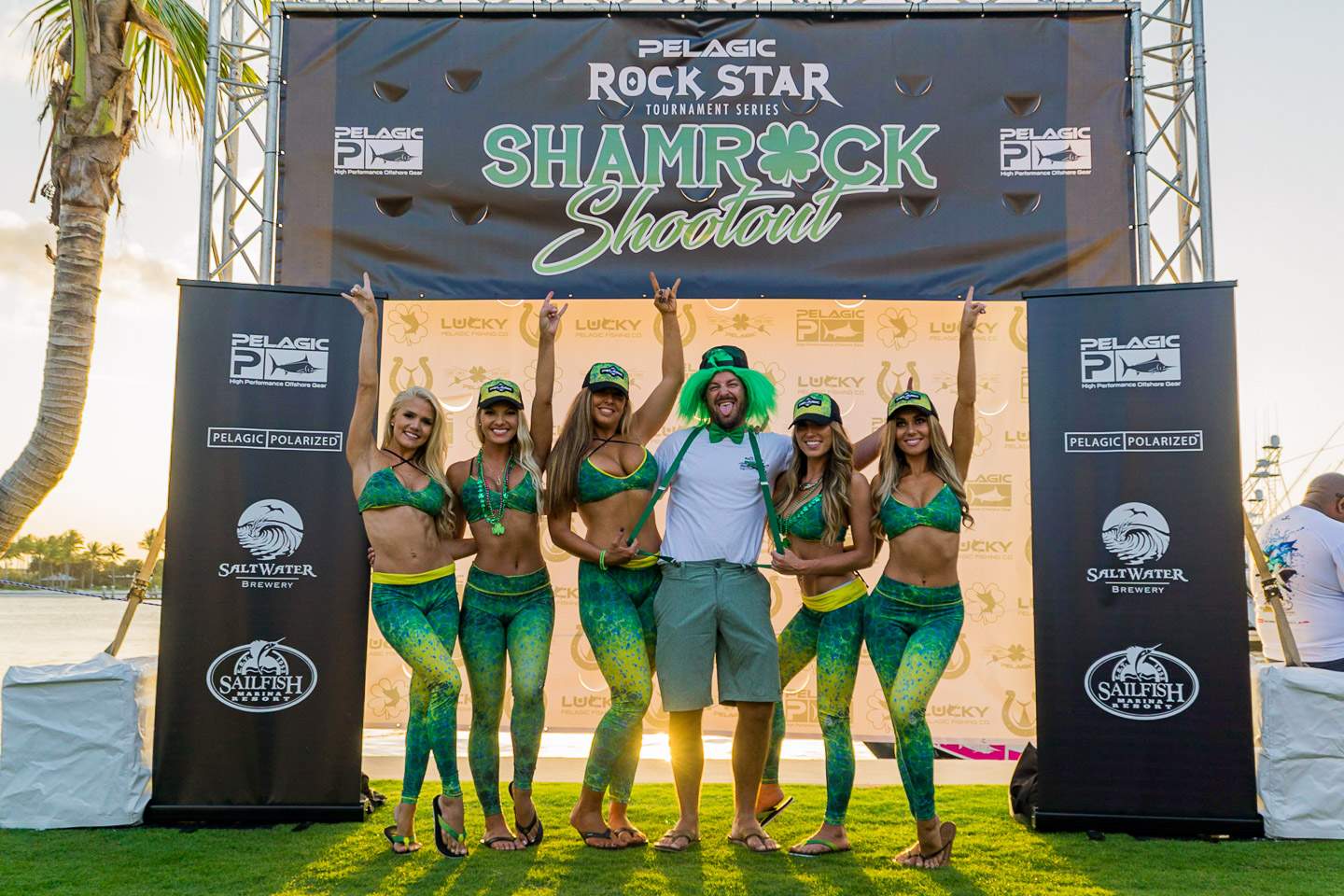 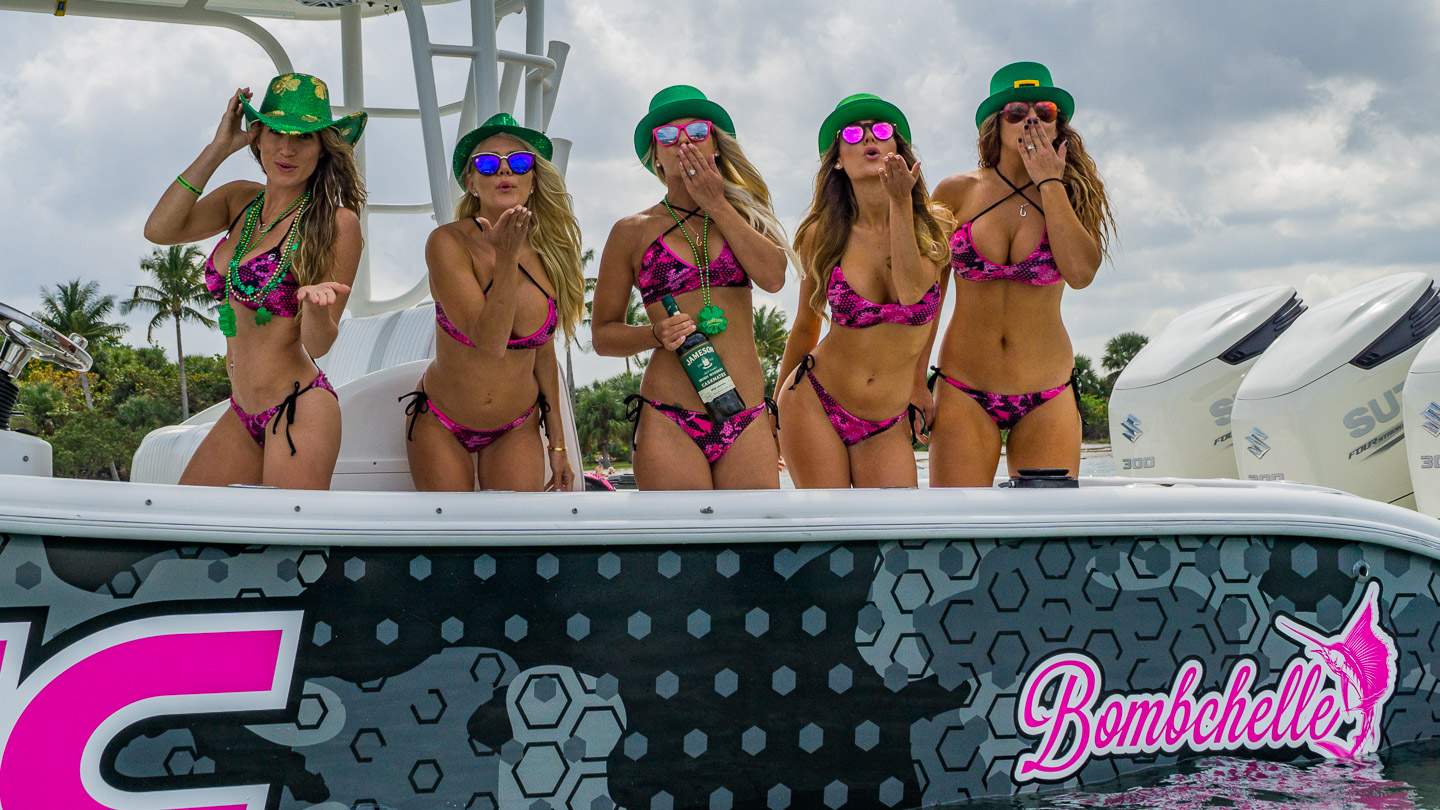 Check out the full PELAGIC TOURNAMENT SERIES event schedule below... Join in on the FUN and we'll see you on the water! 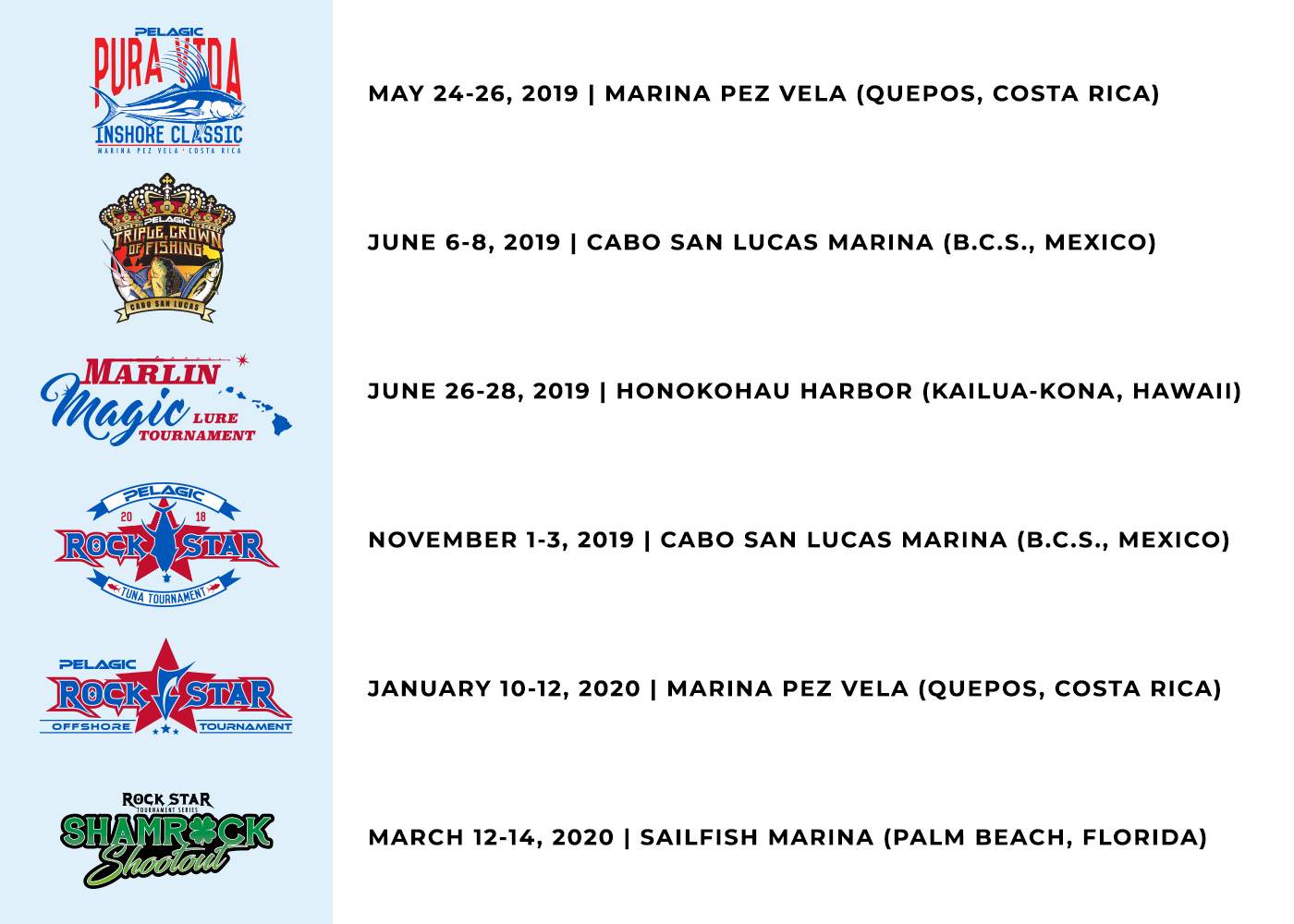