June 6-8, 2019 – Cabo San Lucas, B.C.S., Mexico – The Pelagic Triple Crown of Fishing Tournament once again kicked-off Southern Baja’s big game fishing season as teams from all reaches of the United States, Mexico, and beyond competed for prestige and some serious cash in a fun, yet competitive event south of the border. Thirty vessels made up the 6th Annual Pelagic Triple Crown fleet, all of which experienced a scorching marlin bite off Mexico’s “Vegas-by-the-Sea”. 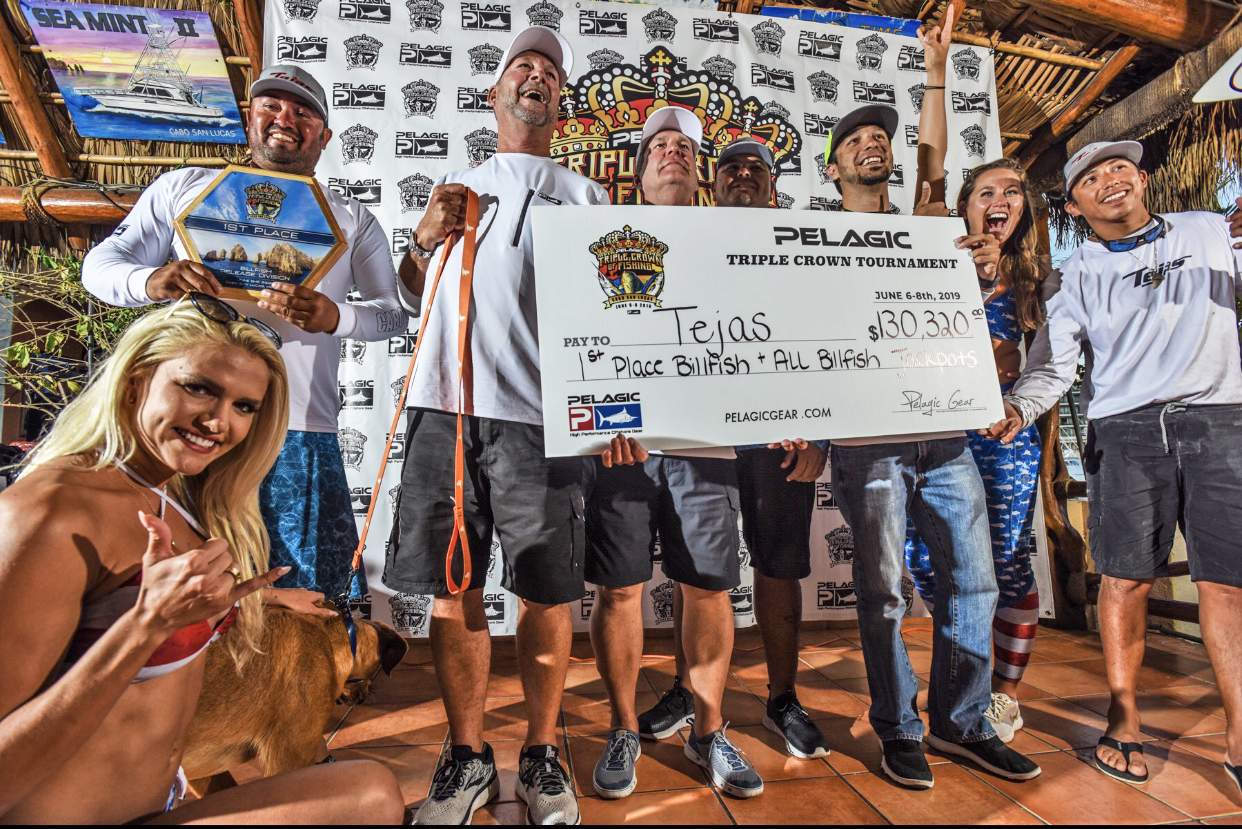 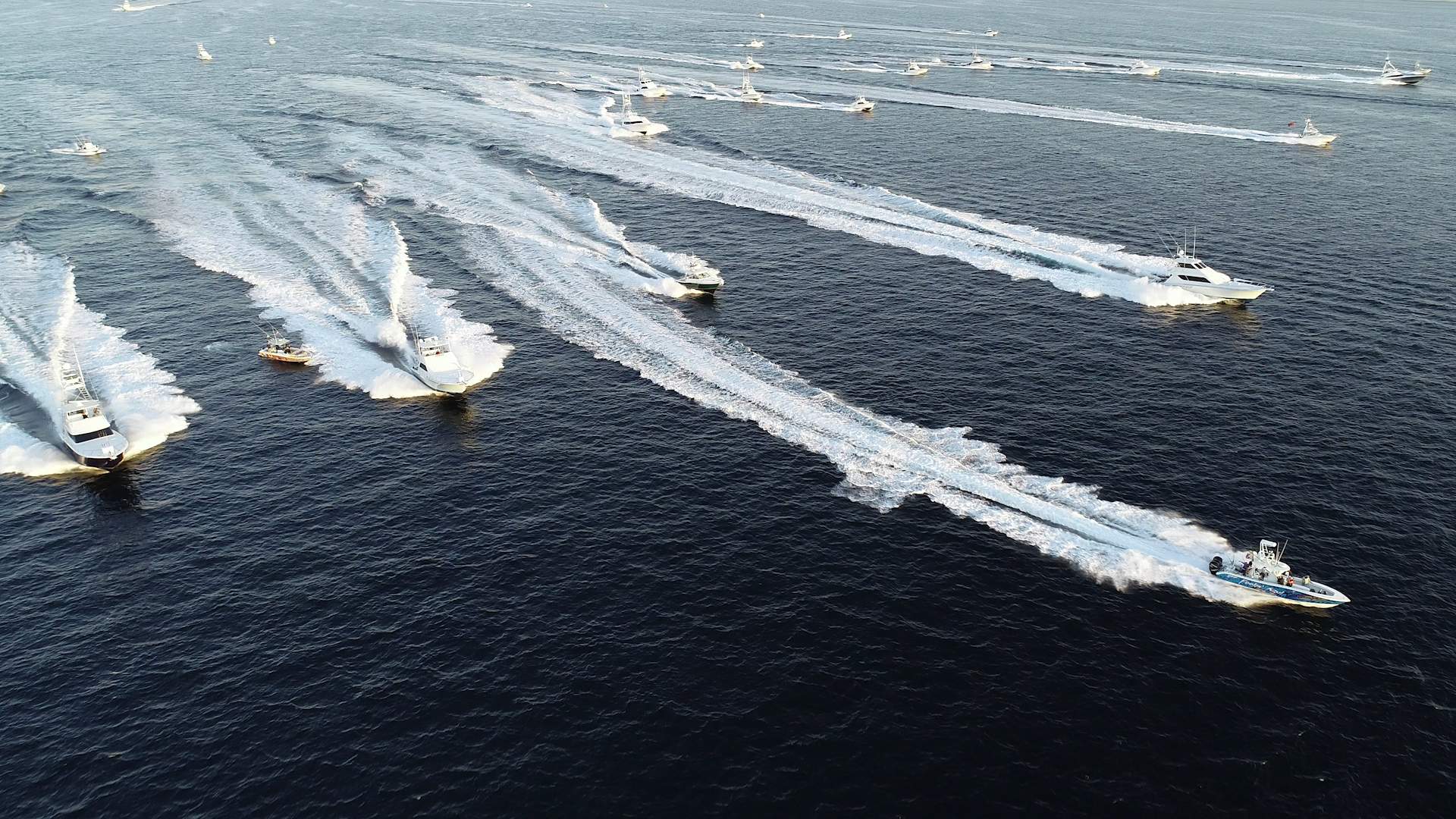 The Pelagic Triple Crown of Fishing Tournament is a team event with cash and awards to well over $300,000 and is structured to focus on catching the wide variety of bill and gamefish species that Cabo San Lucas is so well-known for. Awards are presented to teams and anglers for their performance in releasing the most aggregate billfish points and/or weighing the heaviest two-fish total of three offered gamefish species (tuna, wahoo, & dorado) during a two-day tournament. 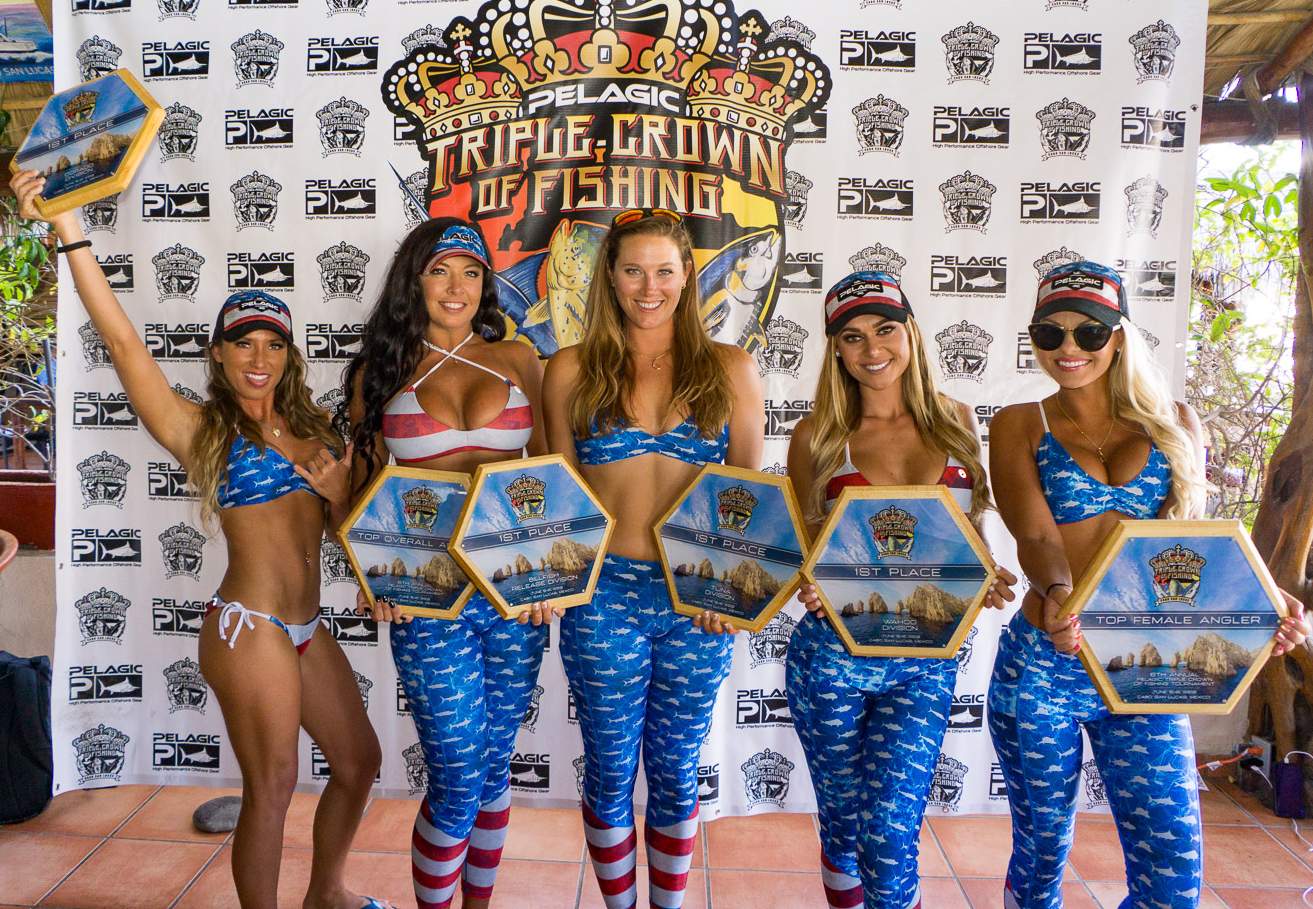 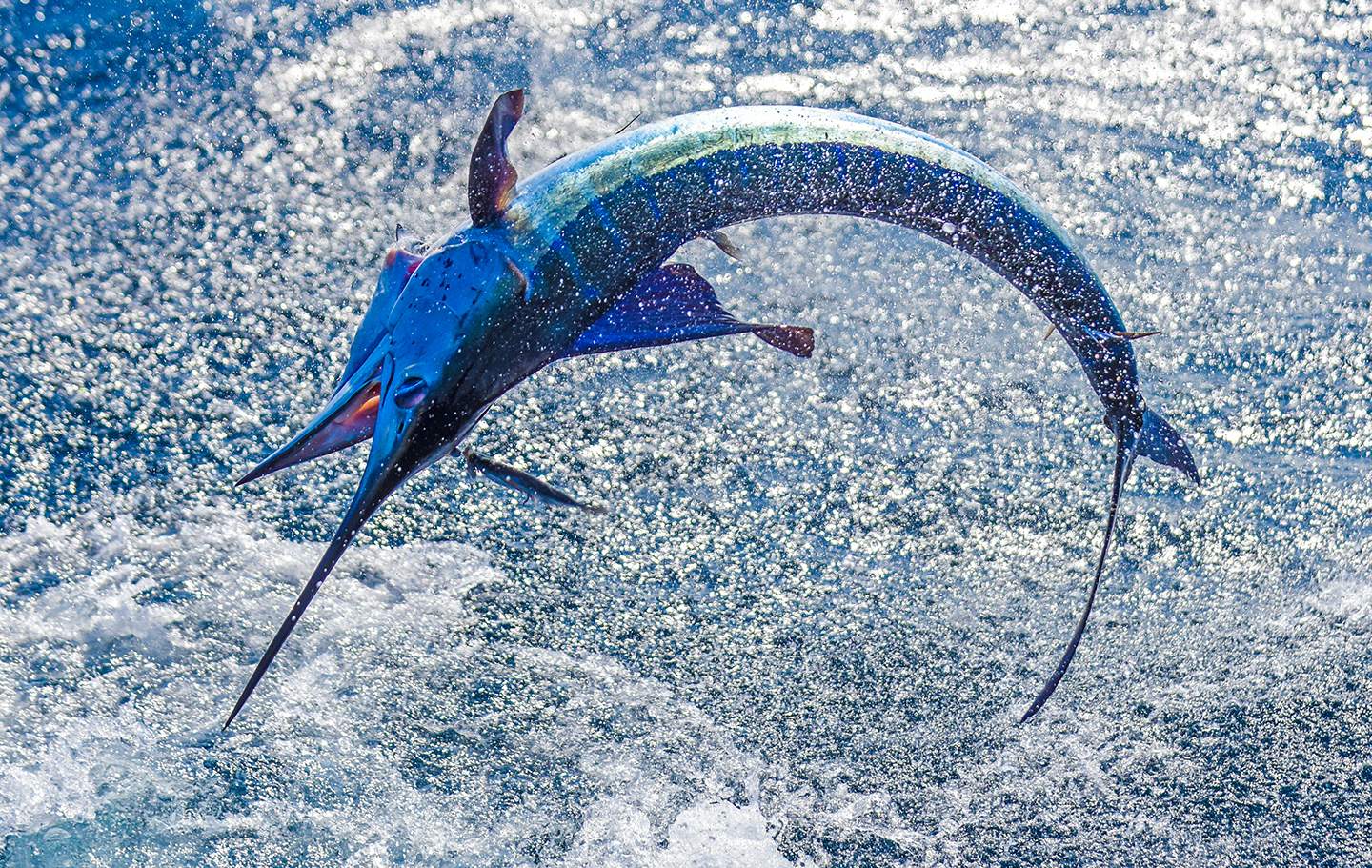 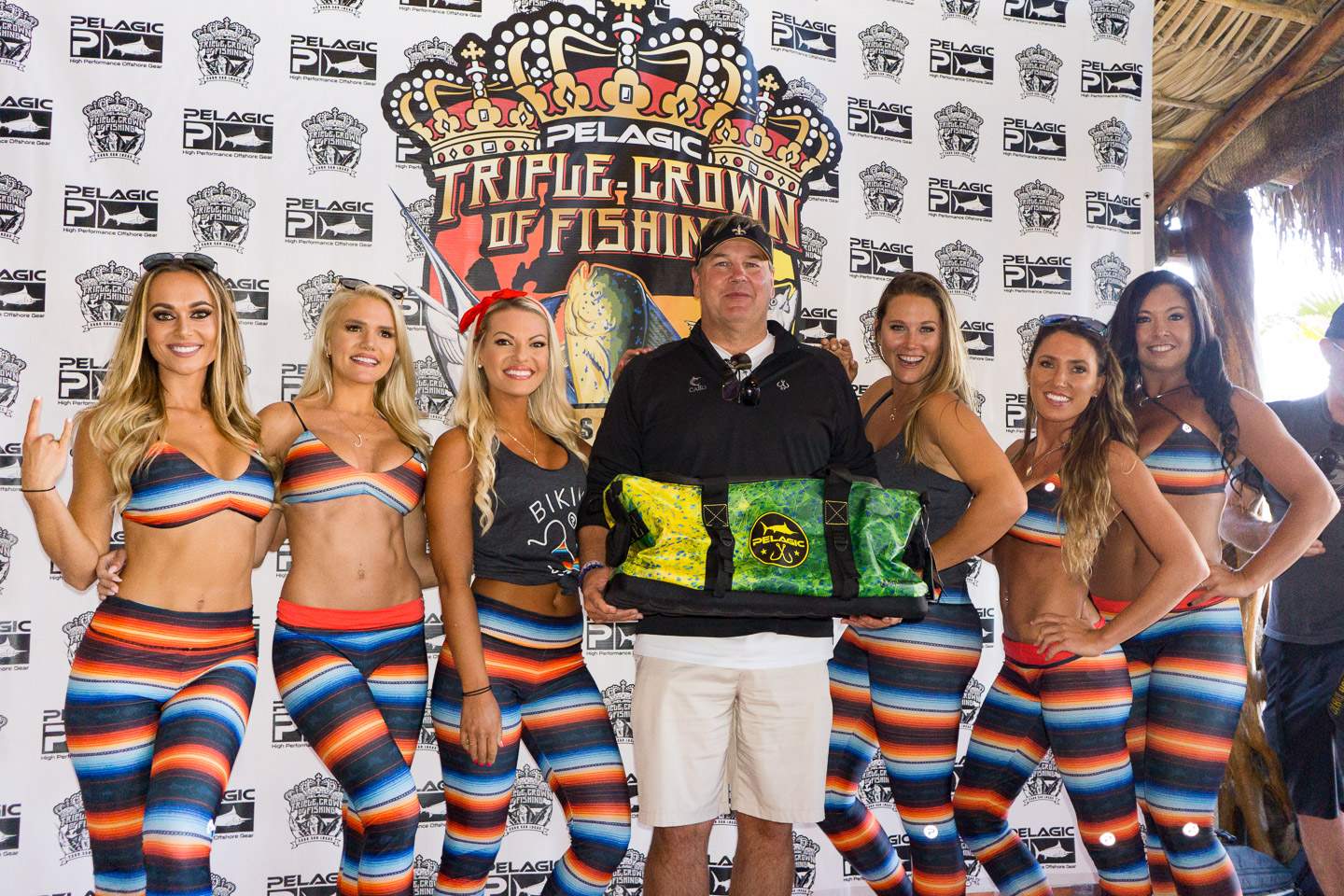 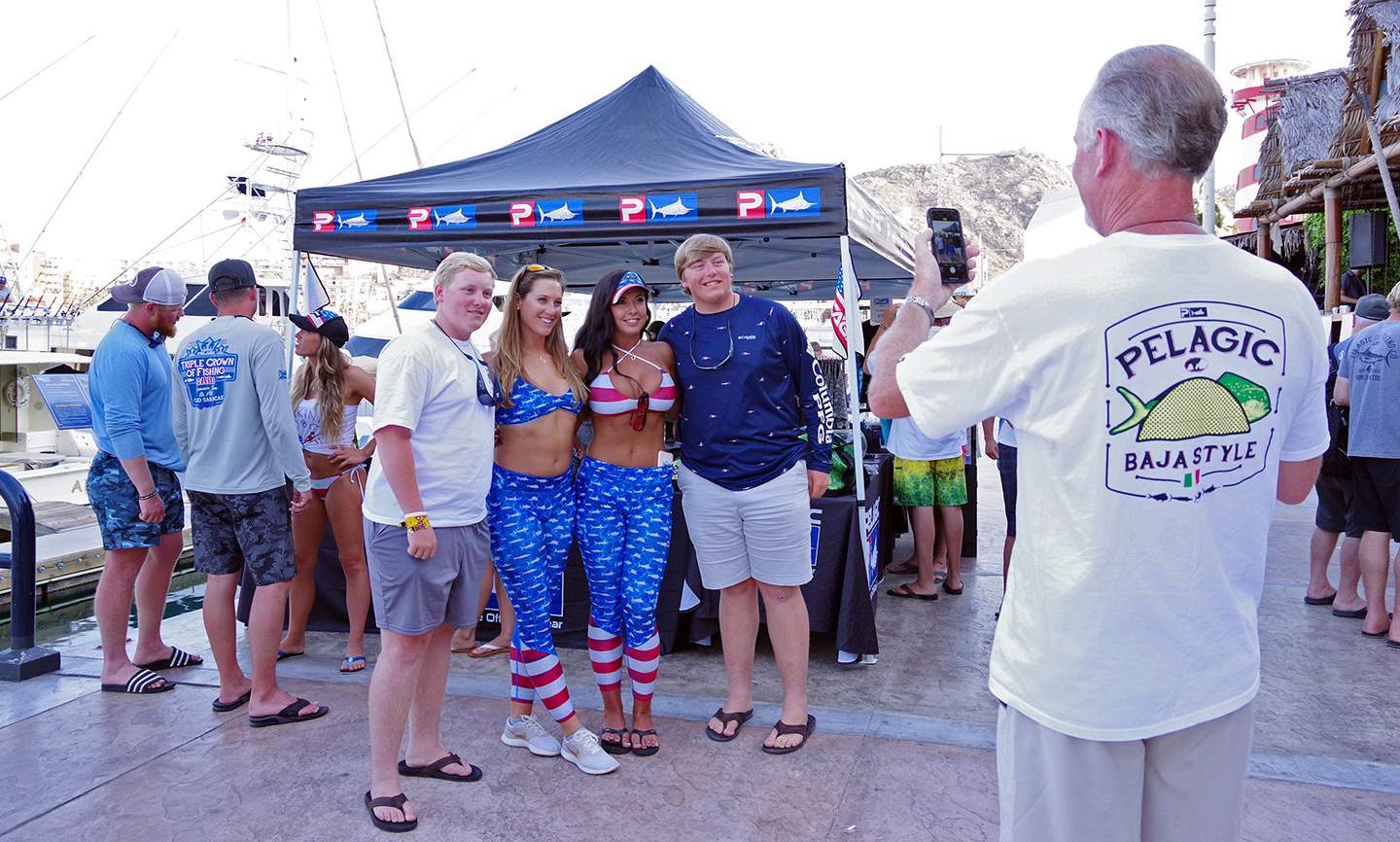 The tournament fiesta commenced on Thursday, June 6th, as all teams were welcomed with an official tournament apparel & schwag bag during check-in, followed by the captain’s meeting, super raffle, and kick-off party extravaganza. Hosted for a sixth straight year on the marina waterfront at Cabo’s favorite fishing bar & grill – Baja Cantina – it was a packed house as tournament participants listened to the vibrant rock-n-roll sounds of Lady Electric Band , while anxiously waiting to hear their raffle tickets called in hopes of winning some incredible prizes presented by the PelagicGIRLs. Fun was had by all, friendly conversation enjoyed, and a few margaritas to boot.

And they're off! Signaled by flare fired by Mexico's Naval Commander, the tournament fleet races off 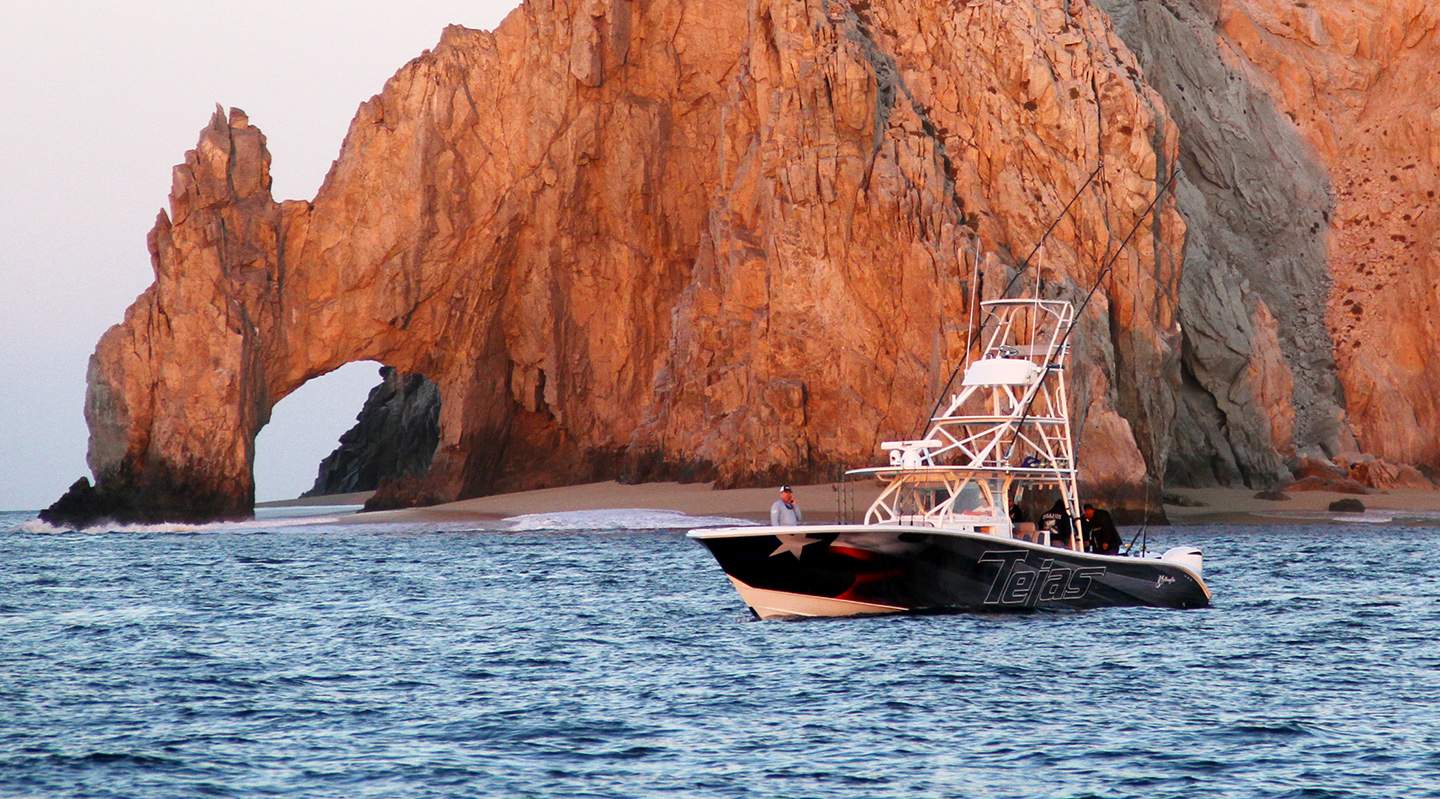 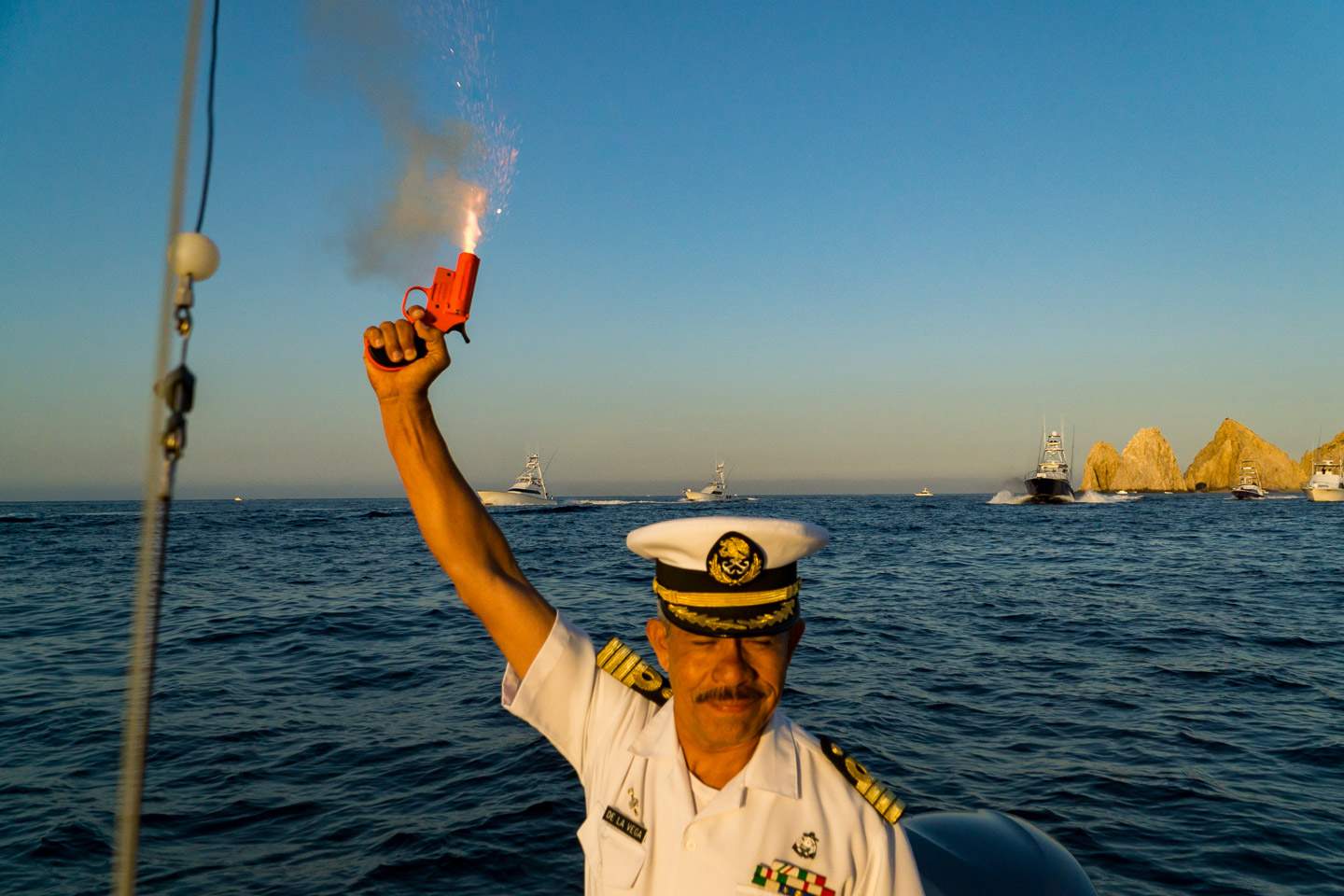 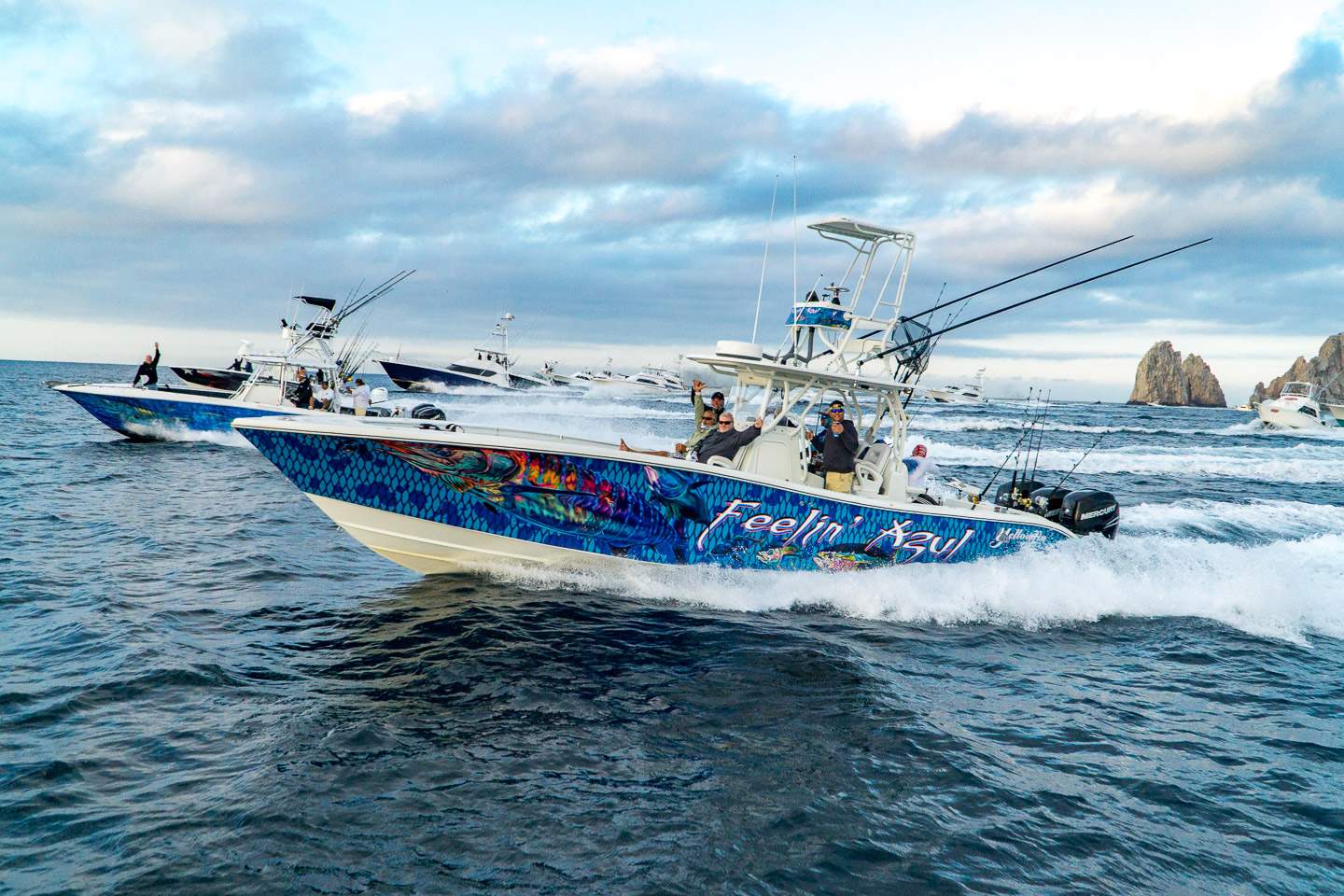 As a fiery sun rose above the tournament fleet on day one of fishing, teams lined up near Cabo’s famed Land’s End Arch awaiting the 7:00am shotgun start. On cue, flares were shot to the sky as teams throttled up towards their desired fishing grounds signally the official start of the Pelagic Triple Crown.

Fishing was red-hot right out of the gates, with teams calling in hook-ups as early as 7:22am, less than half-an-hour after shotgun start. It was a busy day for our radio control team with a total of 94 billfish (93 striped marlin, 1 sailfish) released throughout the first day. Team TEJAS , champion of the 2018 Pelagic Triple Crown of Fishing Tournament, fished aboard their high-speed 42’ Yellowfin Center Console to top the fleet in the billfish division with 1300 release points (13 striped marlin), which secured them the win in all levels of the daily billfish jackpots.

Miss out on tournament apparel? Click below to get yours now!

Gamefish weigh-ins took place next door to Baja Cantina at Gricelda’s Smokehouse, whom graciously hosted the tournament’s official weigh station. Team FEELIN’ AZUL ’s Evelyn Schultz (8-years-old) weighed-in a 30.2 lb. yellowfin that she landed all by herself to earn them the tuna category dailies, while the PelagicGIRLs aboard TAILCHASER and Will2Win aboard VIVIANA I both secured a dorado daily jackpot with their 17.8 and 16.8 lb. fish respectively. REEL GOLD also won a daily jackpot with their 30.7 lb. wahoo. 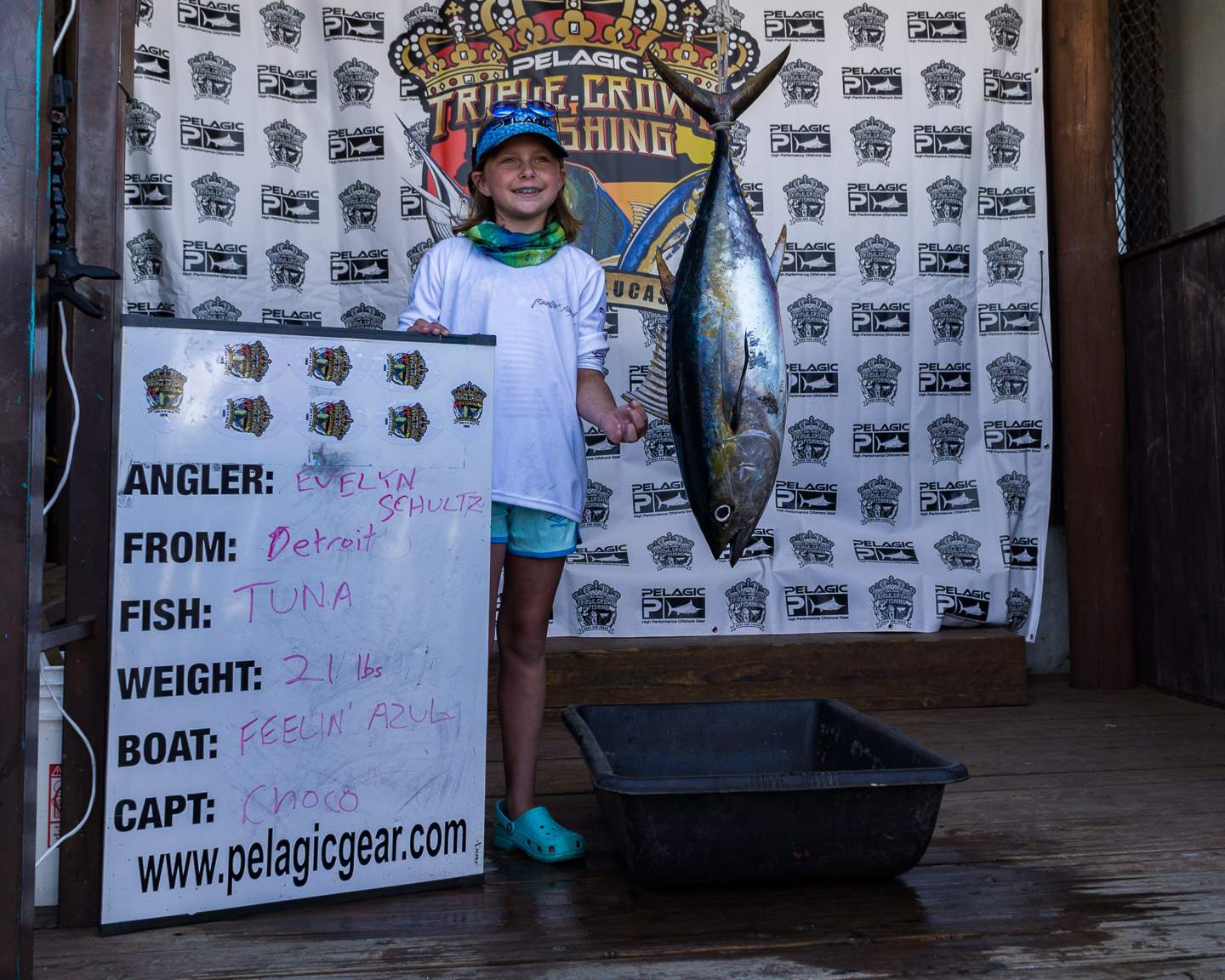 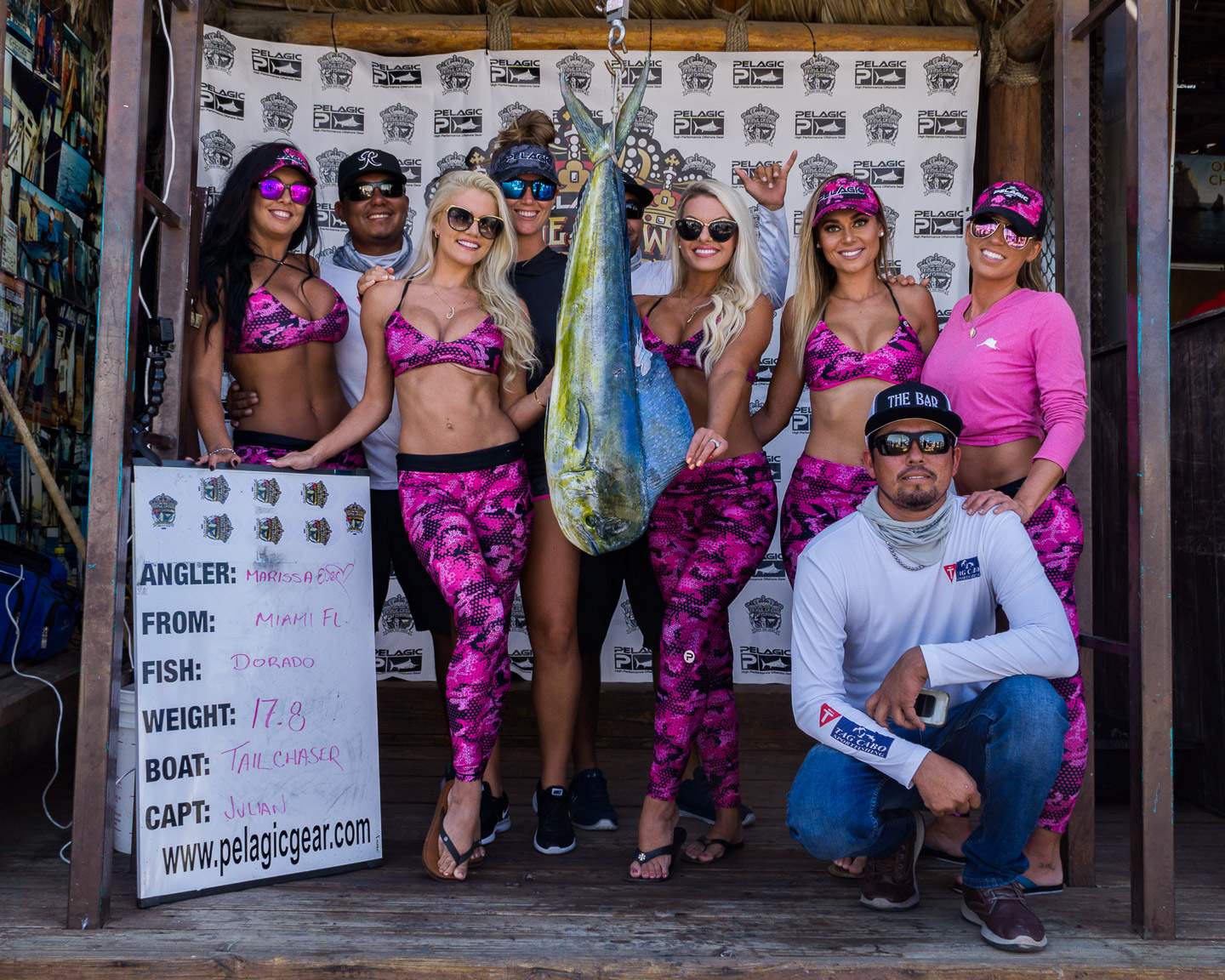 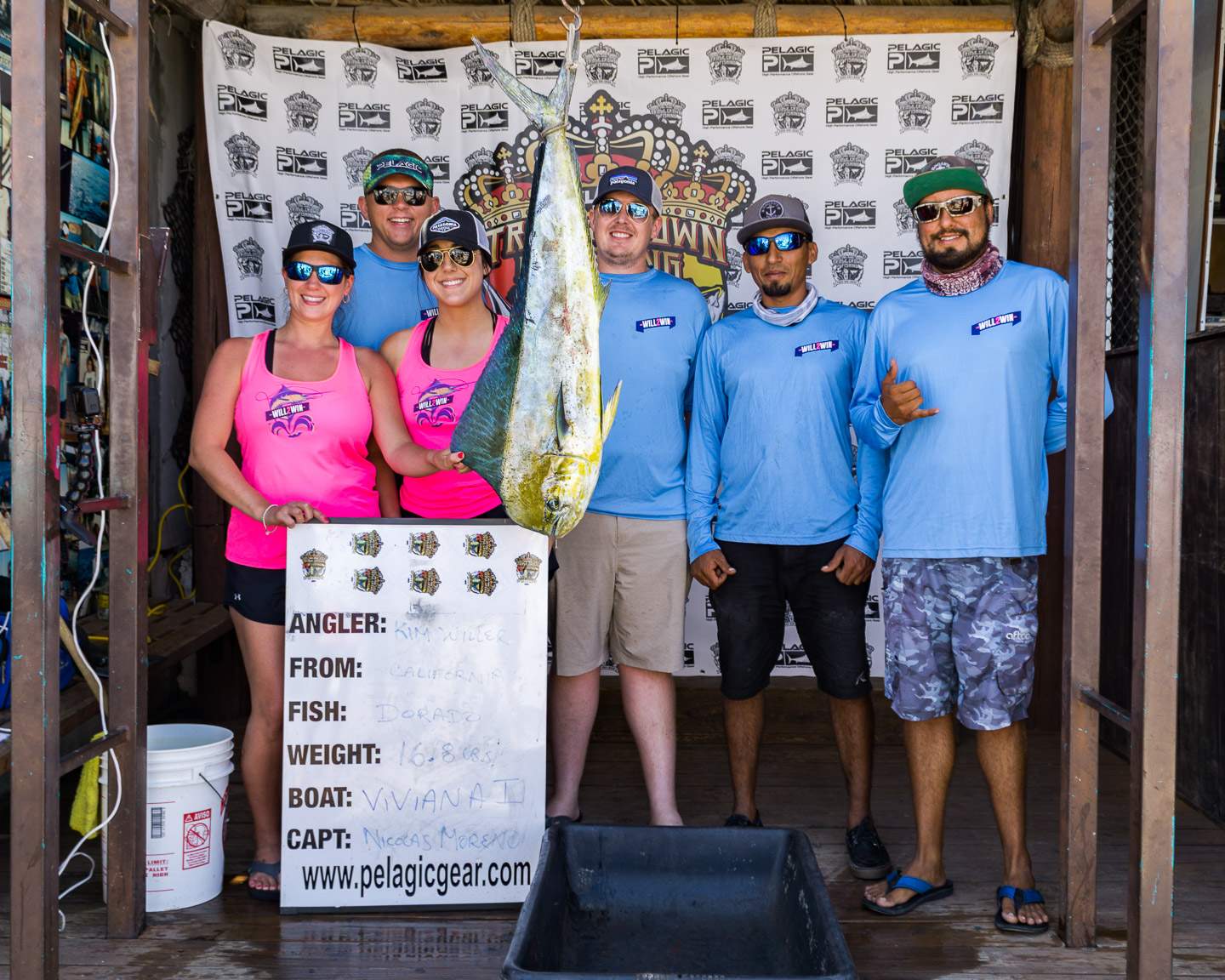 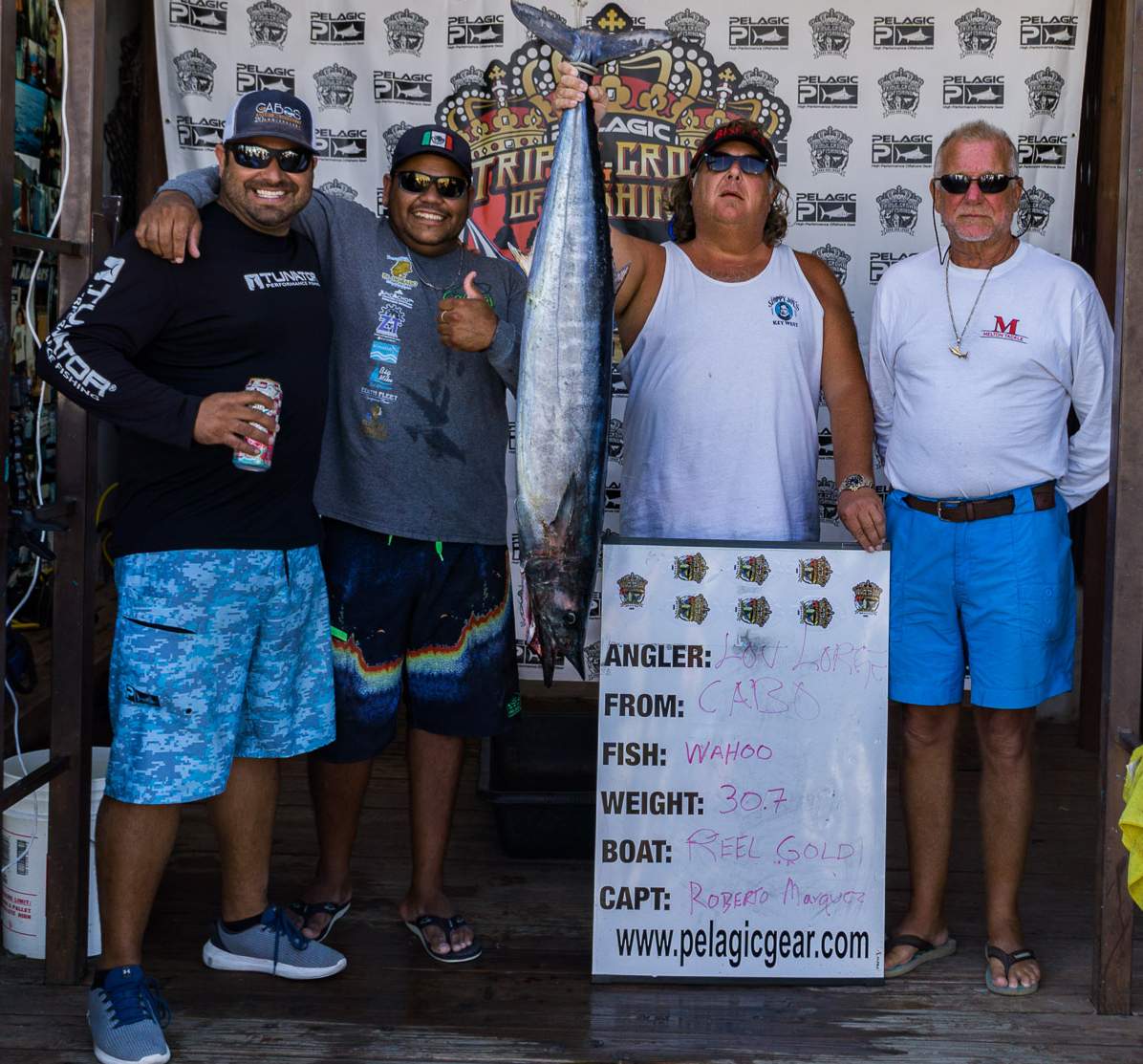 Day two was welcomed with light winds and mild temperatures, setting the stage for another incredible day of fishing off the tip of Baja. 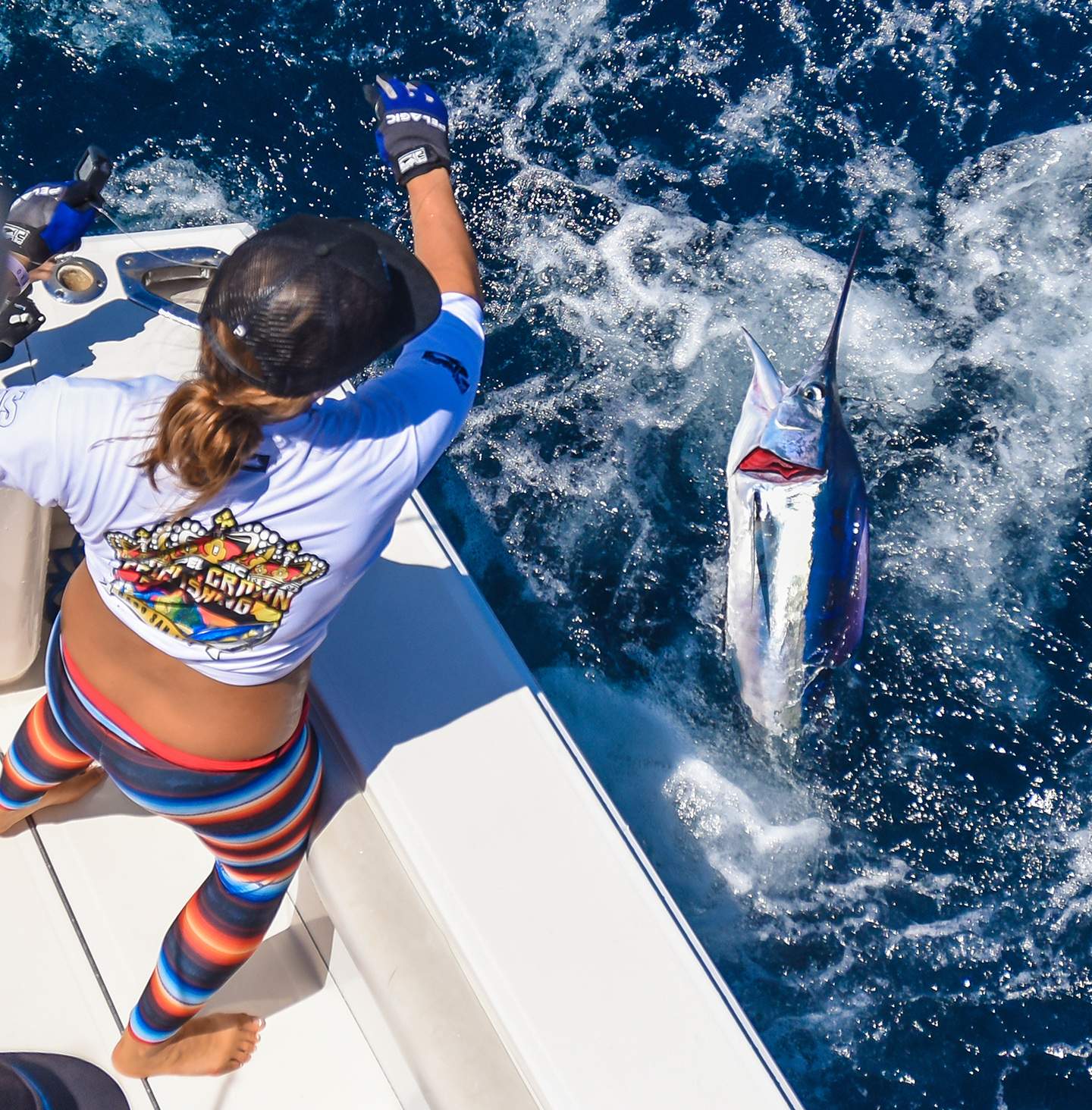 The fast and furious marlin action continued with another 76 documented striped marlin releases by the thirty-team fleet. At the end of the day, it was once again TEJAS besting the tournament field by scoring 1400 billfish release points (14 striped marlin). Combined with their 1300 points from day one, TEJAS posted a staggering 2700 points (27 striped marlin) over the course of the two-day tournament. 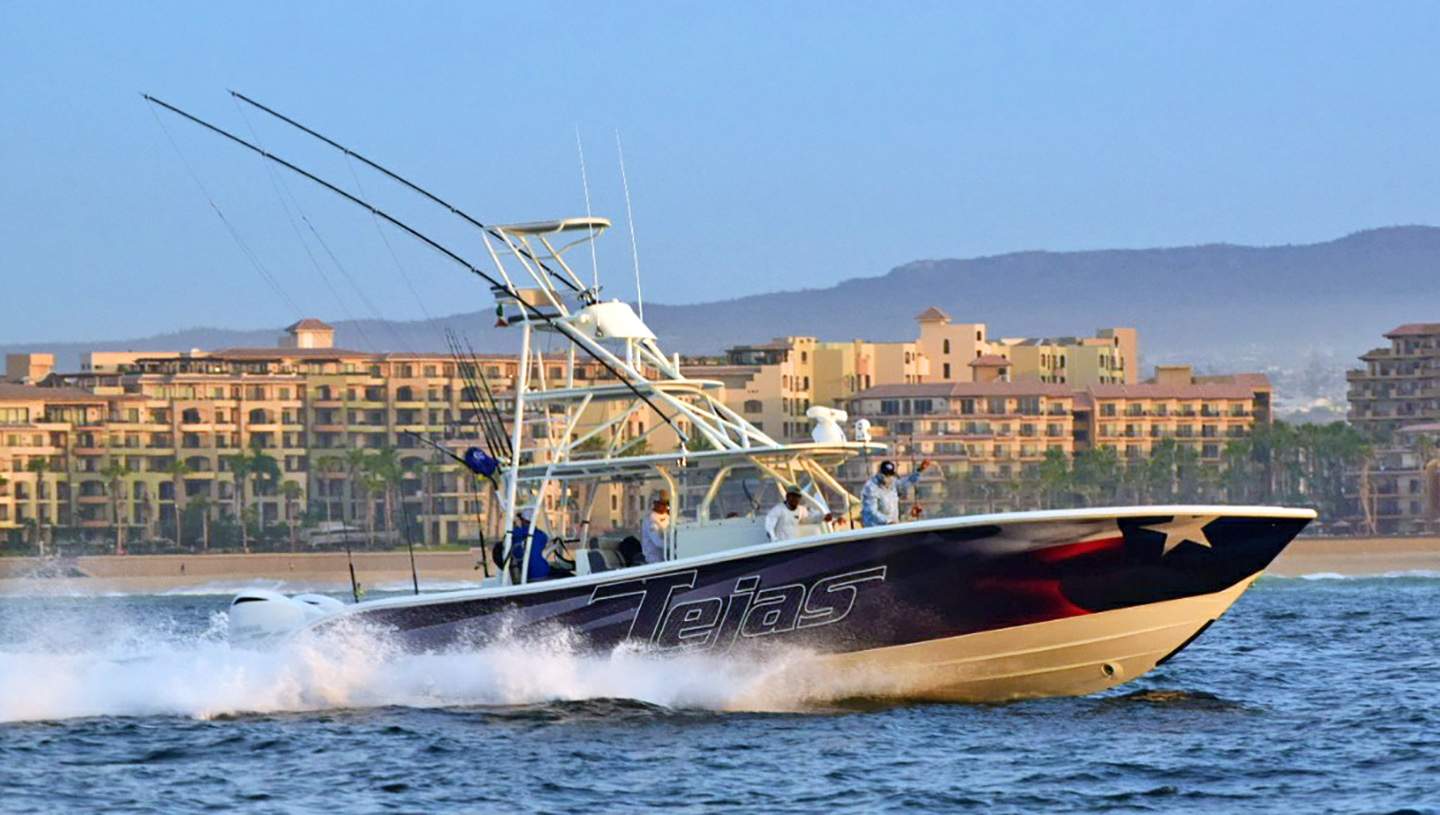 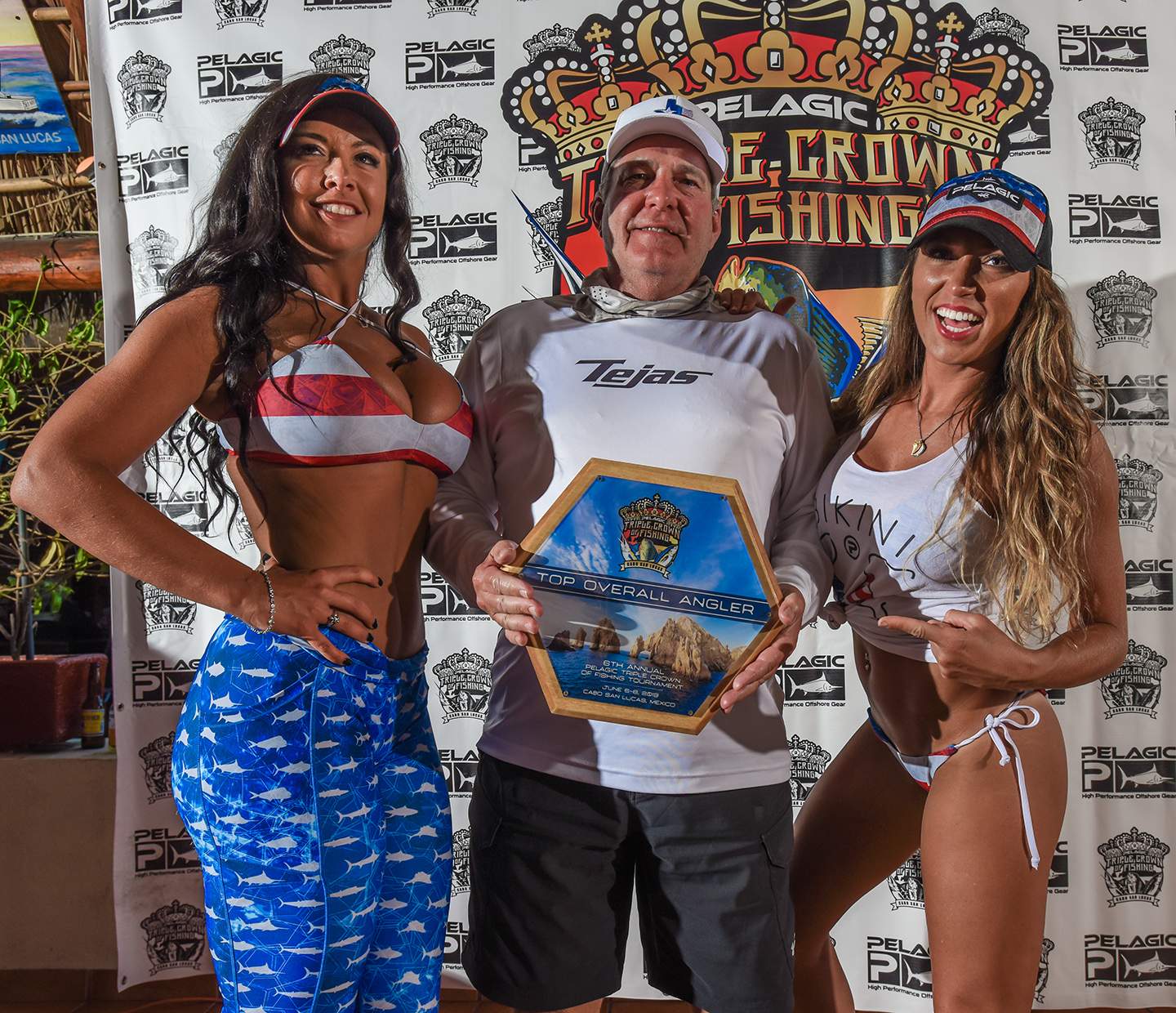 The weigh station at Gricelda’s Smokehouse was once again busy as our weigh masters once again scored team’s heaviest tuna, wahoo, or dorado. It was a banner day for The Struckin’ Fuggle aboard REELAX as this team weighed both the tournament’s heaviest wahoo (33.3 lbs.) and dorado (22.8 lbs.). Their fish earned them first place trophies in both the Wahoo & Dorado Divisions, while also securing multiple daily jackpots for each species. They walked away with smiles all around and a grand payment of $38,720.00 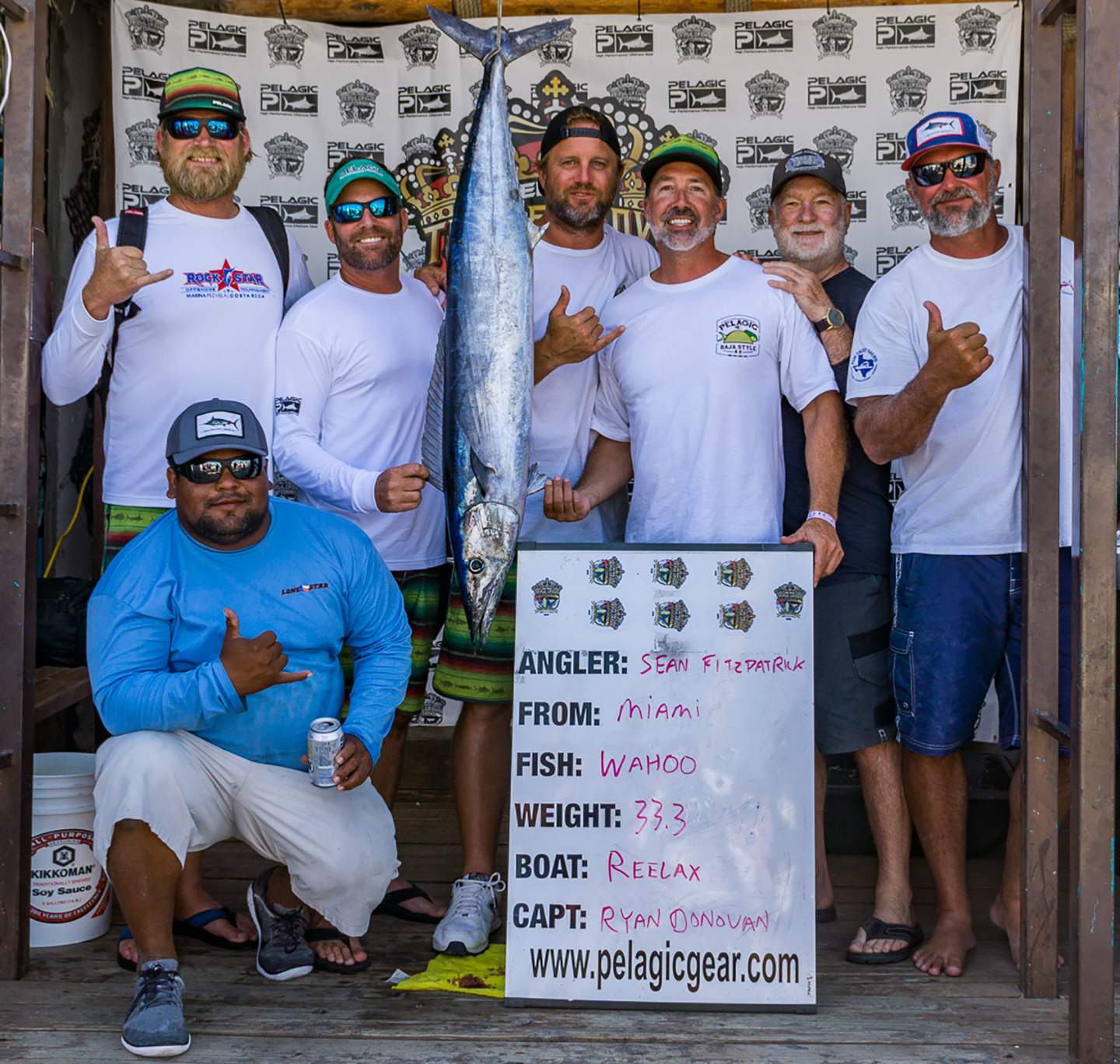 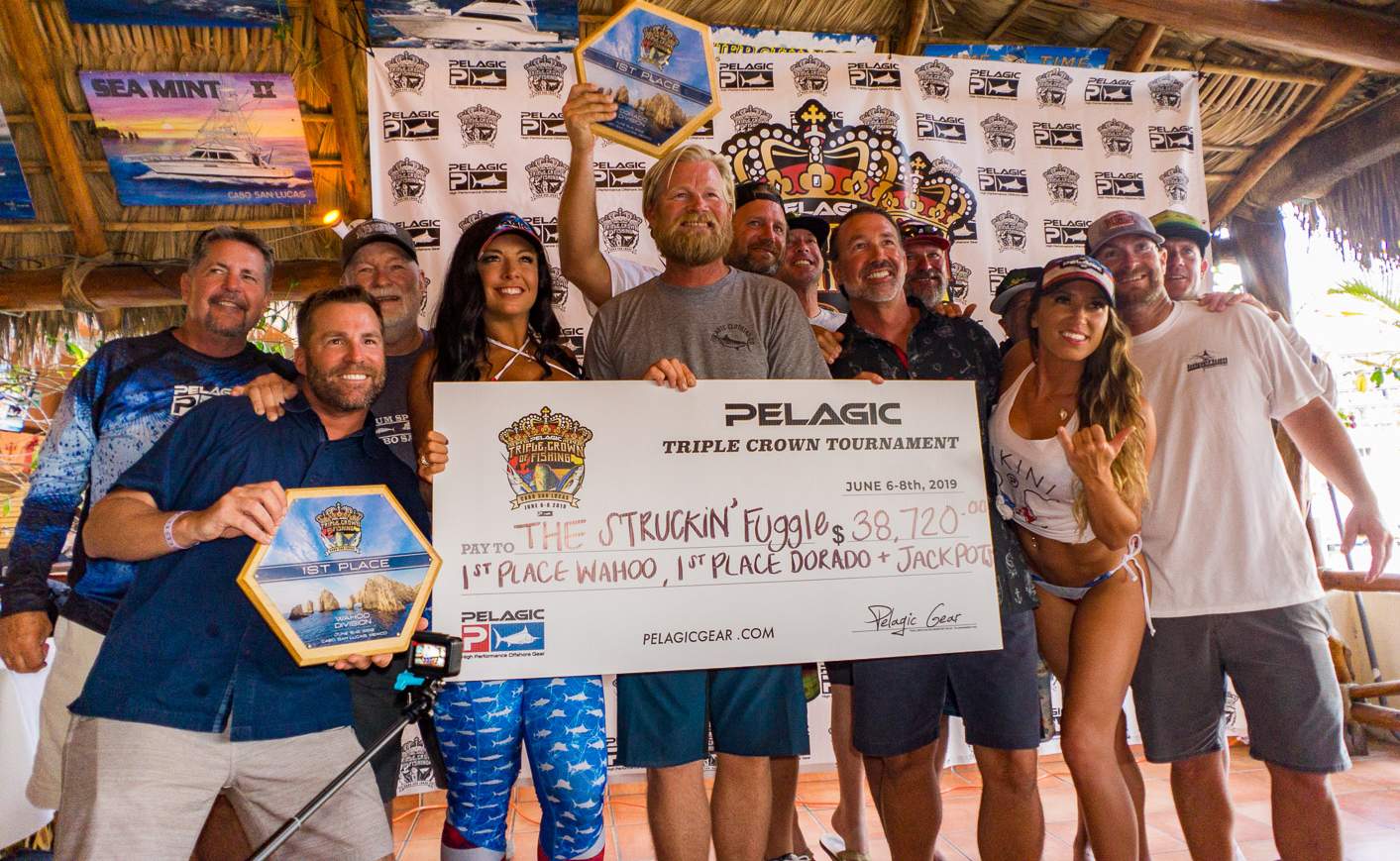 FEELIN’ AZUL secured first place overall in the Tuna Division by scoring an 18.3 lb. yellowfin. Combined with their day one tuna, their two-day score of 48.5 lbs. earned them a 1st Place trophy and a check for $15,560.00 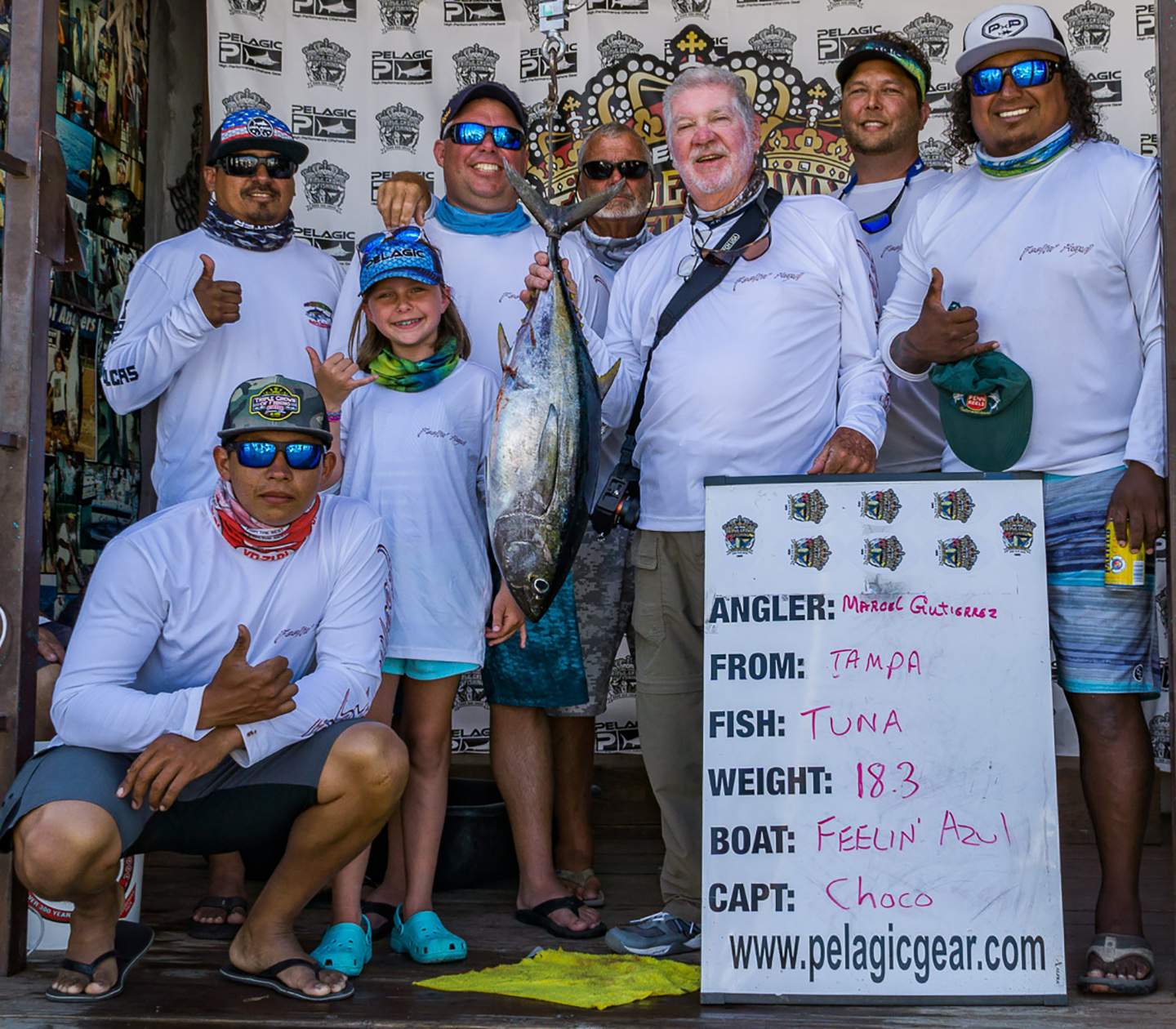 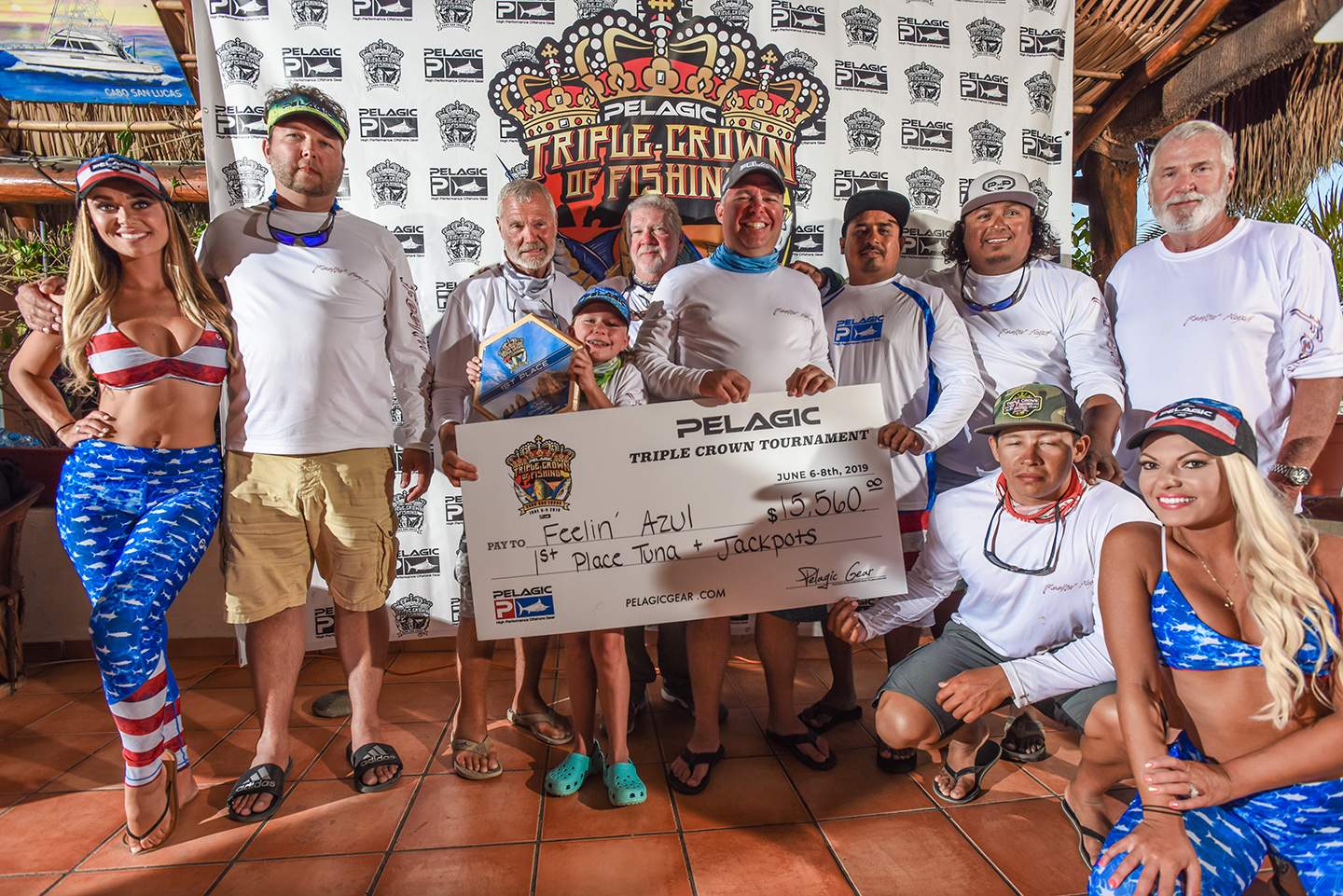 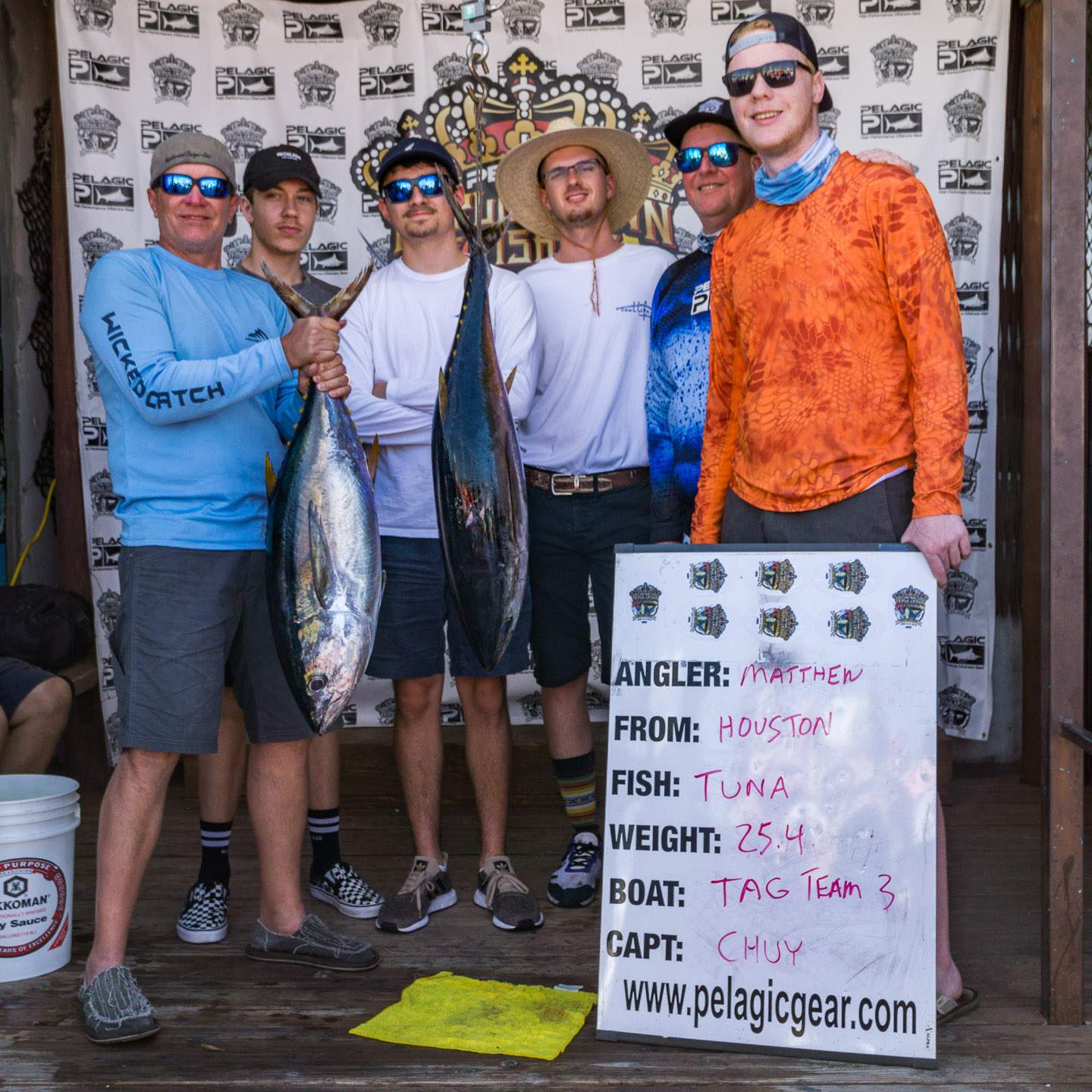 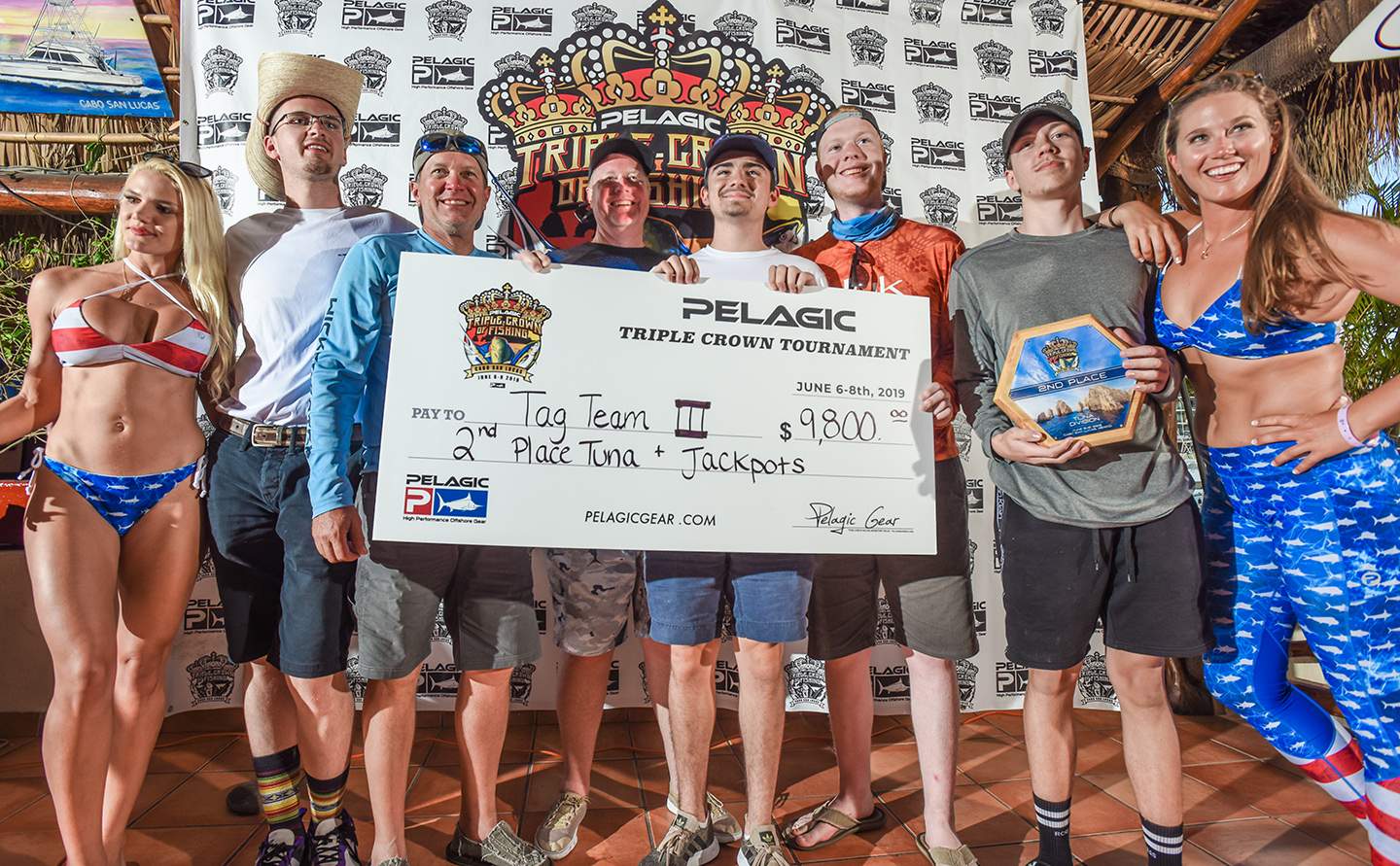 Smiles all around for our Top Female & Junior Anglers! 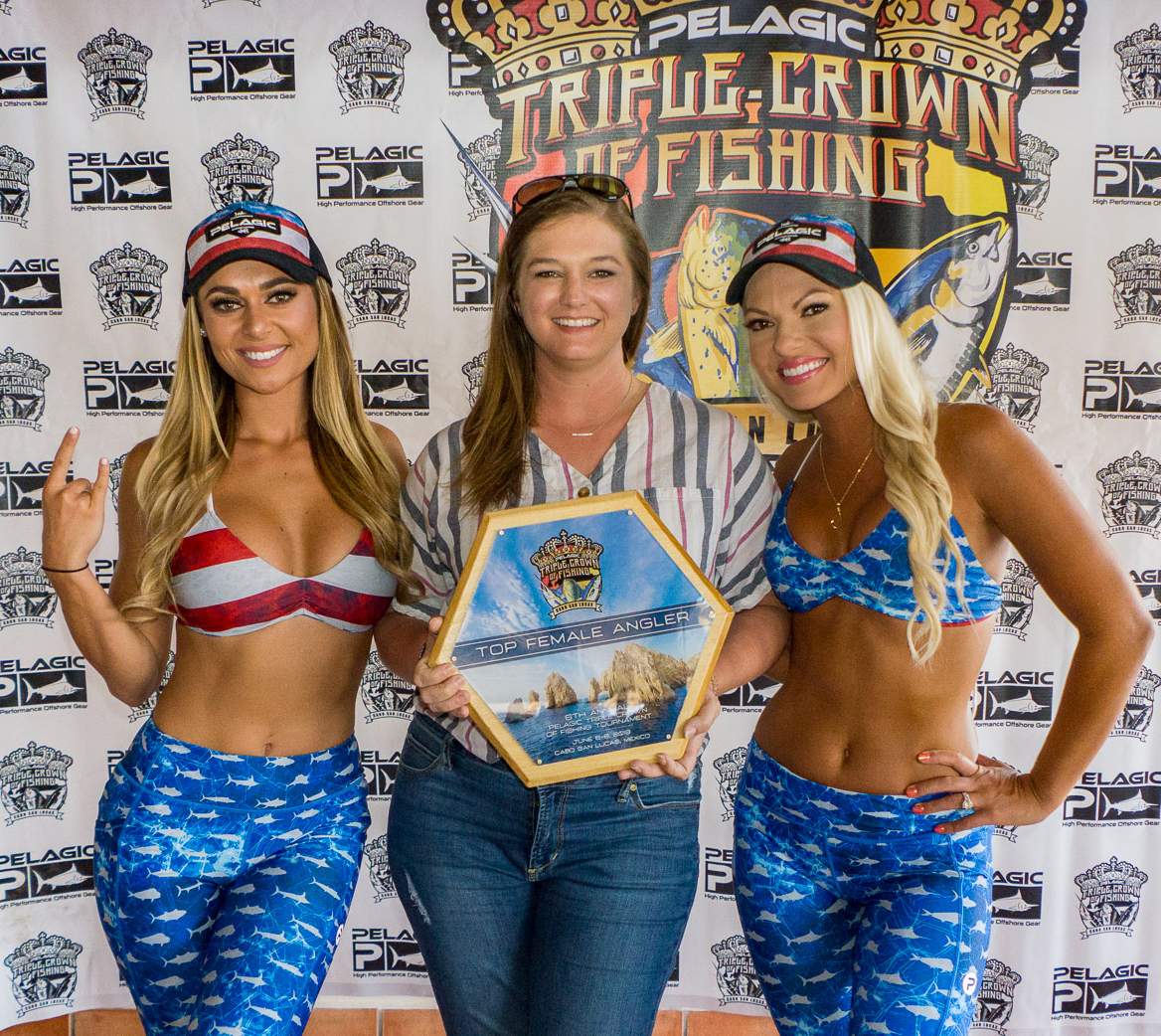 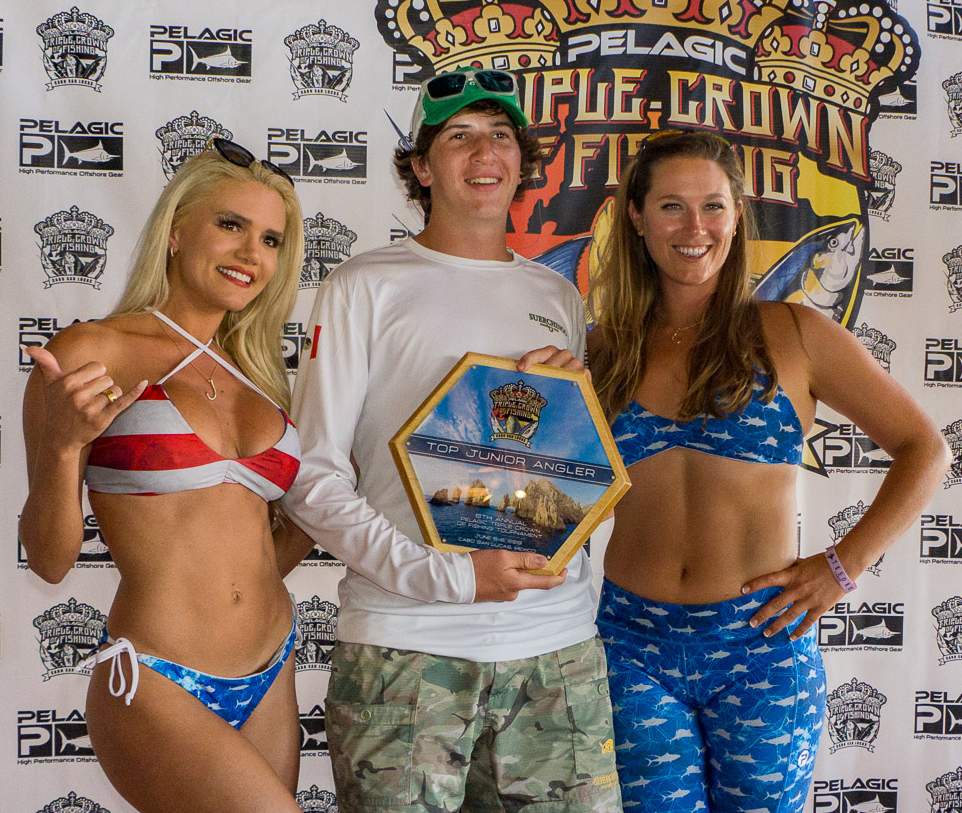 After weigh-ins concluded and all 170 billfish were properly documented at tournament headquarters in Baja Cantina, the results were announced and trophies, prizes, and ceremonial checks awarded to the winning teams:

Thank you again to all tournament participants and our generous sponsors for making this another unforgettable event south of the border. We hope to see you all again June 11-13, 2020 for the 7th Annual PELAGIC Triple Crown of Fishing Tournament in Cabo! 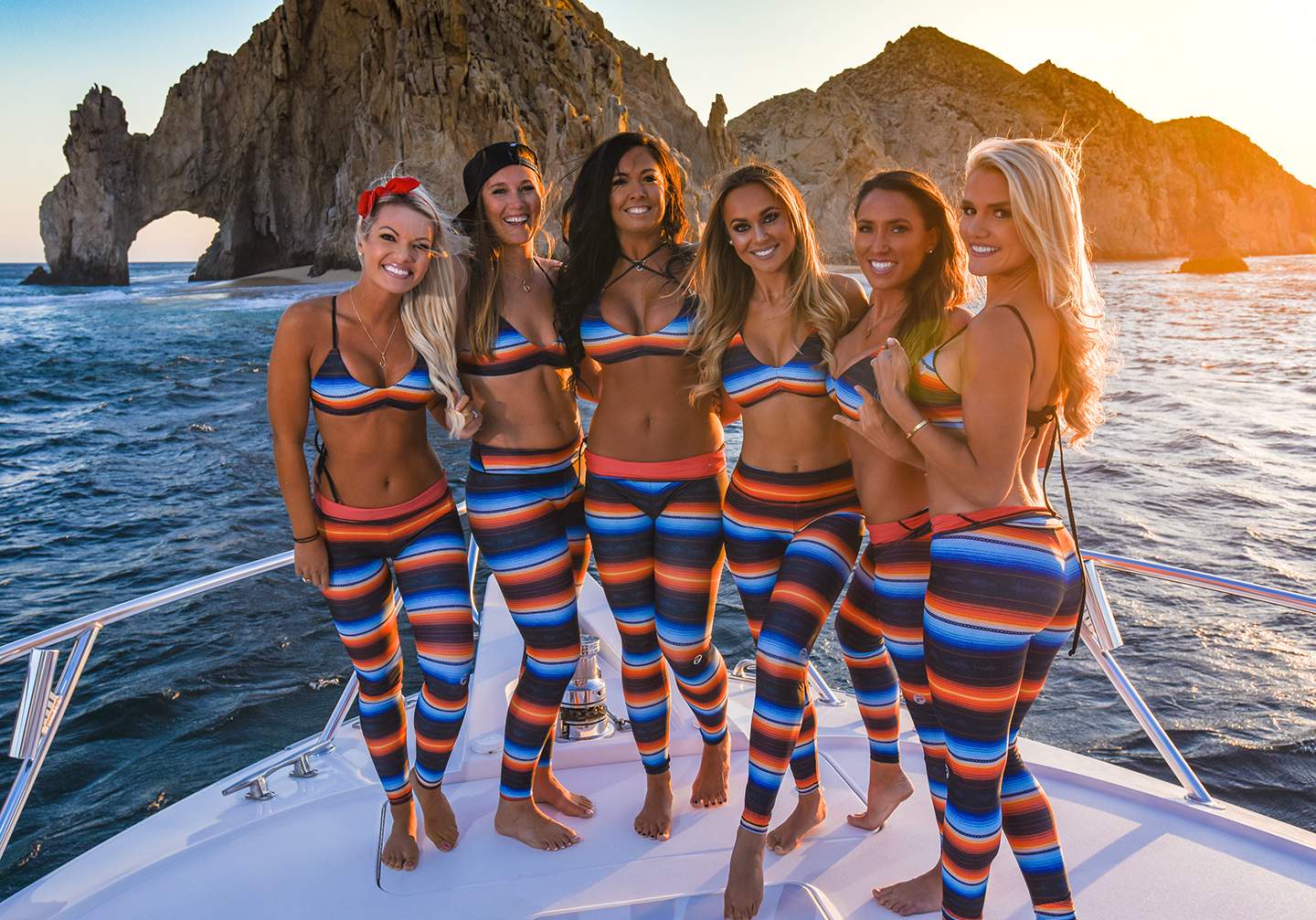 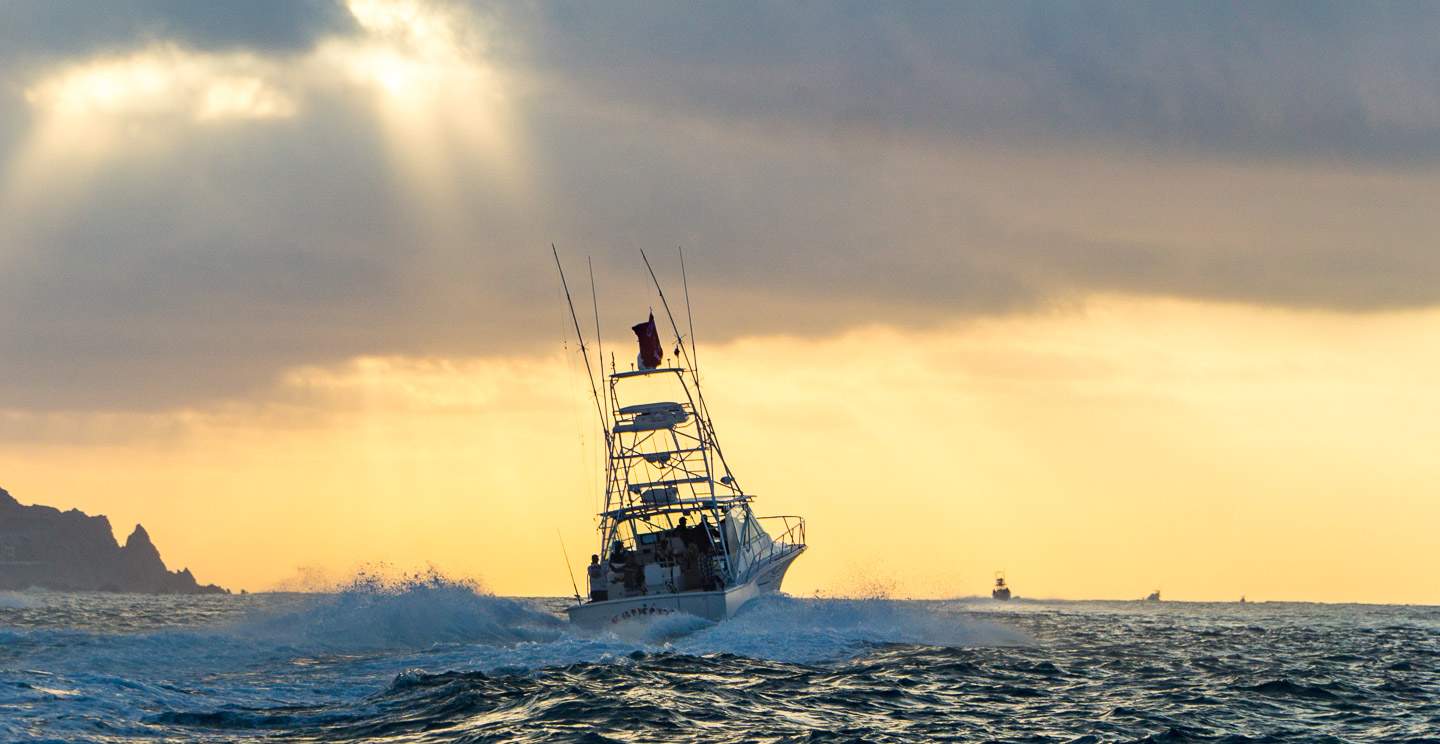 Mark your calendars and come fish with PELAGIC! Below you will find our tournament calendar. Fish one, or fish them all! 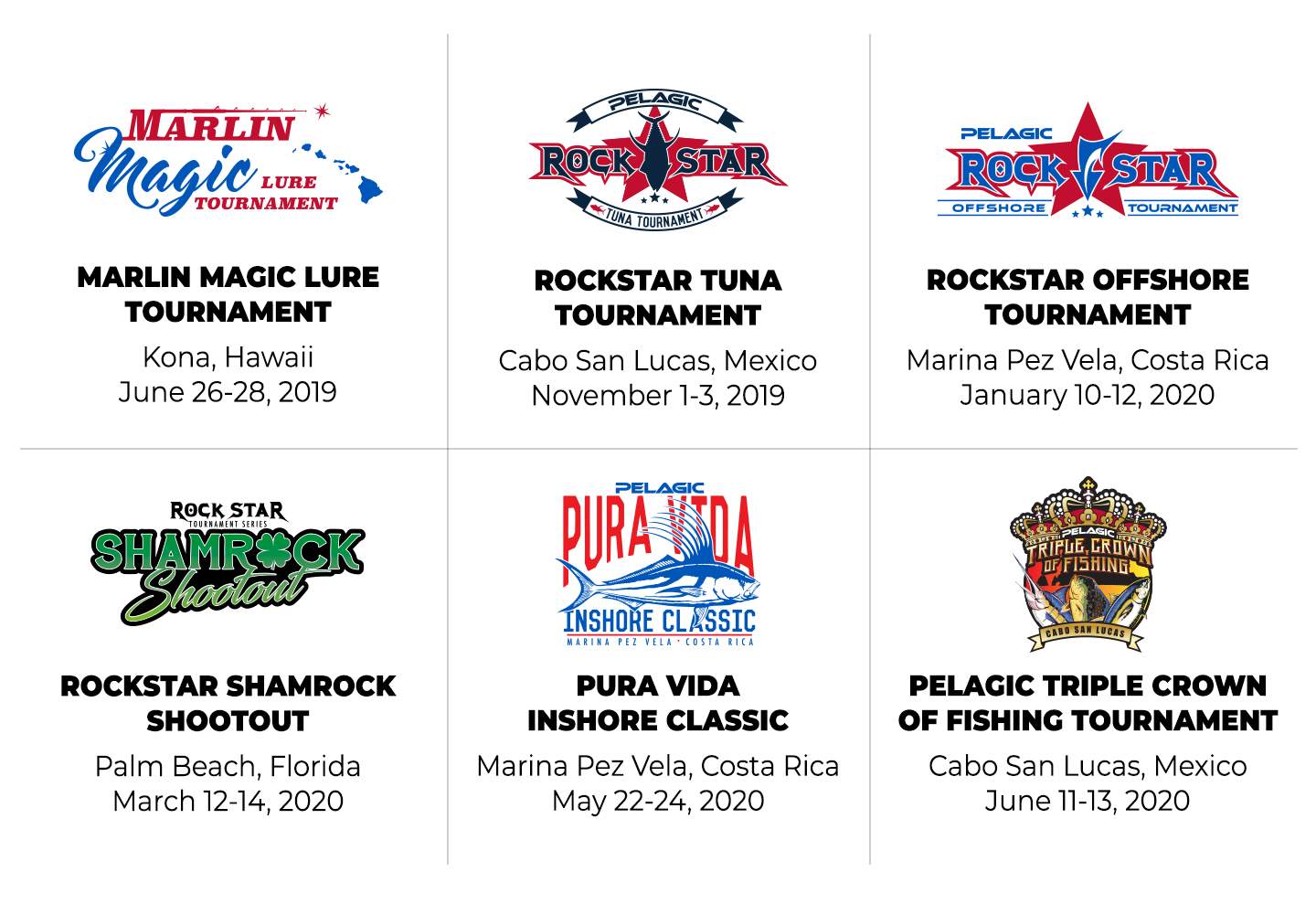 Check out additional photos from the tournament in the gallery below